In one of the most densely populated Asian cities, Tokyo, real estate prices are so undemocratic that a part of the population of the city is forced to live in most bizarre and unusual "apartments." So-called Internet refugees permanently live in the booths and cubicles of Internet cafe. Some even manage to rent a locker to live in. The 11-million-strong Moscow may use this experience some time in the future. 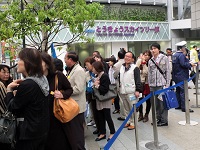 A mini apartment in Tokyo is a symbiosis of train compartment shelves, a cabinet and a box. Such apartments are called geki-sema. They are stacks of large boxes one on top another. They may look like caskets with electricity in them. The boxes are usually installed in several floors in the premises of normal scale. They bring the owners of scarce square meters very good profit, as each dweller in these boxes pays their rent to the owner.

Housing square in Japan is measured with tatami mats, rather than standard units of measurement. The Japanese traditionally cover the floors in their homes with tatami mats. One mat measures about 1.6 square meters. The size of one geki-sema is two tatami mats.

It is impossible to stand up tall in a horizontal "room". It is believed in the country that such living conditions are primarily intended for young and poor people, who come to conquer the capital. But this is just an attempt to cover up the shame. In fact, quite mature Japanese people live in these coffins too, even though they gave away many years of their lives to working for various corporations.

The residents of such dorms share a bathroom and a shower. Noteworthy, the price of "apartments" may vary depending on the options available. For example, the price for a compartment with a window will cost about 55,000 yens a month, which is 586 dollars. The price includes heating and electricity. Those who want to save money can rent a "room" without a window - for 45,000 yen or $480.

Another habitat of the poorest part of "blue" and "white-collars" of Tokyo is Internet cafes. When the Internet came to every Tokyo home, and wi-fi appeared on almost every square meter of the Japanese capital, numerous Internet cafes began looking for new opportunities to earn money.

They began to evolve from common Internet cafes to normal cafes for intellectuals. Gradually, former Internet cafes in Tokyo started to turn into specific hotels. With the onset of global recession, the owners of these premises started to break them into sections measuring 1 to 2 meters with plastic walls. Spending a night in such a room costs about $25. Initially, the service was offered to office workers, who came late for public transport. They could thus spend a night in more or less decent conditions.

Then it turned out that a lot of office workers were willing to rent such cells as their permanent place of living. Monthly rent costs quite an amazing amount for such modest infrastructure - 600-650 dollars. Owners provide unlimited free Internet, films, music and other digital content. Taking a shower is not free - it costs $3 and has to be shared between 25-30 people living in an Internet cafe.

Almost all dwellers of Internet cafes are referred to the category of office workers and artists. They can not afford renting a normal apartment in the capital for a few thousand dollars a month. Living in a cage is much cheaper and more practical than living out of town. On the outskirts of Tokyo, rent prices are cheaper, but still quite expensive - 1,5-2 thousand dollars. Plus, one has to spend 1,5-2 hours traveling to work and back home every day.

Three years ago, the authorities of Tokyo showed interest in the fate of these "Internet refugees." Three years ago, there were nearly 5,400 of such people in the Japanese capital. The government decided to provide financial assistance to them so that the "refugees" could afford modest, yet adequate apartments. Three years have passed, and the number of "refugees" has increased to 10,000 people, not counting geki-sema residents.

The catastrophic shortage of housing allows landlords to make fortunes on the so-called working poor. It happens not only in Tokyo, but in some other Asian cities - Beijing, Hong Kong, Seoul. Thousands of Asians come to big cities in search of a better life and end up in a trap of ultrahigh rent prices.

Moscow has been catching up with large Asian cities in terms of high housing costs. The Russian capital traditionally remains in the top three or five most expensive cities on rent prices, usually following Tokyo and Hong Kong.