In the desire to prevent the popularity of the opposition pro-Russian Party of Natalia Vitrenko, Ukrainian authorities resorted to a formal rehabilitation of the "fighters for Ukrainian independence" who shared the Nazi ideology and applied Nazi methods operating under the Nazis. Now Petlyura, Bandera and the like should be honored. 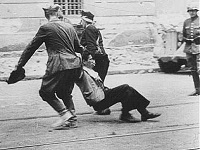 January 16th marked the end of nearly a three-year process with regard to recognition of organizations led by Simon Petlyura, Stepan Bandera and other fascist "heroes" of Ukrainian "independence". The court refused to reverse the decree of ex-President Yushchenko of January 28th, 2010, stating that the above figures were considered "participants in the struggle for the independence of Ukraine" with provision of honors and privileges. He explained that the decree did not personally affect or violated the rights of the plaintiff - Natalia Vitrenko.

On January 16th, 2010, during the first round of presidential elections, Yushchenko gained ridiculous six-plus percent of the vote, did not get into the second round, and lost hope of re-election. He became a "lame duck" politician, whose days in the top ranks of the country were numbered and who should have refrained from important political decisions, leaving them to his successor.

But no such luck. Realizing that he had nothing to lose, he issued a number of highly controversial decrees. The most scandalous of them was awarding the status of a Hero of Ukraine to Stepan Bandera on January 20th, and eight days later awarding the status of heroes to all homegrown aggressive nationalists.

However, Bandera (and his colleague, UPA Chief Roman Shukhevych) were stripped of their Hero titles. This was done reluctantly and because of a quite ludicrous reason - they were not citizens of Ukraine. To this the supporters, not without logic, argued that then they had to deny honorary statuses to all heroes of the Great Patriotic War if they died before Ukraine became independent, and, accordingly, were not citizens. One way or the other, but President Yanukovych, backed by the decision of several courts, in the end "reluctantly" canceled his predecessor's decrees against the Nazi collaborators.

However, while Bandera and Shukhevych were stripped off the title of Heroes, they, along with their colleagues and spiritual predecessors, including the leader of the Ukrainian People's Republic during the Revolution Simon Petlyura, are still regarded as fighters for Ukrainian independence. That is, they are still considered heroes, though formally they do not have the highest title.

Even the lawyer of Bandera Jr. (a grandson of the bloody executioner) Roman Orekhov, not hiding his satisfaction with the court decision, said in an interview with "Young Ukraine": "My conclusion is this: the position of the authorities is to send Vitrenko as far as they can." Mr. Orekhov is quite right. Natalia Vitrenko is focused on the same constituency as the Party of Regions - Russian-speaking and eager to make friends with Russia. The only difference is that she is really trying to implement this course, while people from Donetsk are cynically using convenient slogans to win the next elections. Then they will start looking up to the "blessed Europe" and flirting with the nationalists.

It is clear that had the judges admitted that the "pillars of Ukrainian Independence" were ordinary fascists, it would have raised Natalia Vitrenko's chances to unprecedented heights. This is why the Ukrainian government that totally controls the judicial system would not allow this ruling. Among other things, the Supreme Administrative Court (the one that recognized the legitimacy of Yanukovych's victory in the 2010 elections), wrote in its verdict: "None of the judgments, including the Nuremberg Tribunal, recognized the activities of the units (in particular, the UPA, the OUN, and The Carpathian Sich) listed in the decree (of Yushchenko - Ed) as Nazi." This means that the members of all of these units can be regarded as heroes without reservations.

Pro-Bandera community is rejoicing, as this judgment has become a convenient precedent that can be used as the basis for silencing "Ukrainophobes," including, apparently, president Yanukovych. Why did he deprive Bandera and Shukhevych of the title of Heroes of Ukraine? They were not Nazis but patriots.

The most influential Bandera party "Freedom" of Oleg Tyahnybok will definitely rejoice. After all, now when it is called "neo-fascist" its members can openly get offended: "On what basis? The Nuremberg trial did not condemn us along with Hitler."

In reality, there are more than enough reasons to equate Ukrainian nationalist militants with the Nazis. Starting with the advancement of a socialist national ideology (this was its original name) to the oath of allegiance to "Fuhrer" of the fighters of SS Division "Galicia". Incidentally, the SS was explicitly recognized as a "criminal organization" in Nuremberg.

However, long before the landmark process, back in 1926, Paris jury acquitted the murderer of another "fighter for independence" Petlyura, Schwartzbard. The reason was radical anti-Semitism of Petlyura and his complicity in the brutal murders of tens of thousands of Ukrainian Jews, including relatives of the avenger.

Incidentally, the first thing the brave "fighters for Ukrainian independence" did under the command of Hauptmann Roman Shukhevych who entered Lviv along with the Nazis was a massive pogrom of Jews of such brutality that it surprised even the patrons of the "Ukrainian patriot." The ancient Ukrainian city was given by the German army to Bandera's militants for four days of terror. The SS or Wehrmacht did not take part in it as they did not want to make their hands dirty. The same is true for Belarus Khatyn that was burned down along with women, the elderly and children by the army of Shukhevych.

Not surprisingly, the Lviv city council where the worthy successors of the murderous villains still reside, to this day regularly makes decisions to ban the celebration of Victory Day over the Nazi Germany, offering to call May 9th the "day of sorrow" over the "Bolshevik occupation" of Ukraine.

However, according to a recent survey by "Rating" agency, only a quarter of the Ukrainian respondents support the idea of ​​recognition of the Ukrainian nationalists as the fighters for the independence of Ukraine. Most of them (60 percent) live in Galicia. This opinion is shared by no more than a quarter of the residents of Central and Northern Ukraine (traditionally "orange"), and over 50 percent of the residents of the East and nearly 70 percent of the Donets Basin and the South strongly oppose the idea.

Obviously, all these facts failed to convince the Ukrainian court. However, the Ukrainian judges should not be cursed since such resonant verdicts are approved in other institutions as well. The event described in terms of scale and consequences is comparable only to that of the "Famine Act", issued during Yushchenko's times. The famine of 1933-34 was declared "genocide of the Ukrainian people" by Russians.

The team of Viktor Yanukovych should be congratulated - in their desire to move their rival from Progressive Socialist Party Natalia Vitrenko they gave green light to the rehabilitation of the country's Nazi ideology. This, of course, will not prevent Donetsk from convincing their voters and Russian partners in their commitment to the friendship between the peoples of Ukraine and Russia.