We are in great haste to construct a magnetic telegraph from Maine to Texas; but Maine and Texas, it may be, have nothing important to communicate. 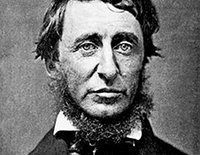 The modern world likes to be presented as always changing, revolutionizing and modernizing. Well, one may say that its tide of pollution, materialism and mediocrity improves all around: but the traits are mainly the same as they were two centuries ago. Think of all those who nowadays criticize America: they all just repeat Henry David Thoreau's superb prose and arguments; for there was more wisdom in American transcendentalism that in the somewhat negative eastern spirituality.

Walden is especially a book you have to read instead of to be told of: for all comments here are mere lies. It is the texte fondateur, as we say in French, a founding text for all those who refuse the matrix, of all those who prefer their cabana -or their isba - to a suburb, and pursue a natural dream instead of a material girl. Yet the book is rather violently anti-system as we would say. Thoreau counsels us to flee this world, to flee the American matrix and its follies.

What is America? America is a word, it is an idea founded upon her own adoration, and the adoration of what's new, modern and technical. Read Thoreau on the subject:

As if the main objects were to talk fast and not to talk sensibly. We are eager to tunnel under the Atlantic and bring the Old World some weeks nearer to the New; but perchance the first news that will leak through into the broad, flapping American ear will be that the Princess Adelaide has the whooping cough.

As if he was reading yahoo news, Thoreau predicts that the more technique we shall have, the more mediocre will be our information. You can check in so many western mainstream media, it is strictly lamentable. This is the reign of quantity, as mystic thinker Guenon told later, against the reign of quality. And we are totally ruled and drowned by the new order of information, a noosphere made of gossip, and this order makes of us new monkeys! Says with acumen (he agudeza of great baroque thinkers) a sad Thoreau:

To a philosopher all news, as it is called, is gossip, and they who edit and read it are old women over their tea. Yet not a few are greedy after this gossip. There was such a rush, as I hear, the other day at one of the offices to learn the foreign news by the last arrival, that several large squares of plate glass belonging to the establishment were broken by the pressure.

The modern word turns us into morons. This is why our rebel with a cause, our raucous genius says that we must get out of the matrix, forgetting any new, including the most important:

If one may judge who rarely looks into the newspapers, nothing new does ever happen in foreign parts, a French revolution not excepted.

Breaking with the system is fundamental, yet it has to be total. Forget even school, for you can educate yourself - with the classics - your children. Today's peoples are infatuate with so expensive American system of education and universities: so wasn't Thoreau who mocks whiz-kids students and the burden of their... debts:

The consequence is that while he is reading Adam Smith, Ricardo and Say, he runs his father in debt irretrievably... As with our colleges, so with a hundred "modern improvements"; there is an illusion about them; there is not always a positive advance. The devil goes on exacting compound interest to the last for his early share and numerous succeeding investments in them. Our inventions are wont to be pretty toys, which distract our attention from serious things.

The refusal of modern improvements and new toys is rather impressive: for Thoreau refuses the world of Apple, even if there was some libertarian and poetic move in Steve Job's first years. Anyway we all know that technology can make our daily life, our cultural life easier. But we have anyway to break with the matrix; and for Thoreau this means renouncing to any kind of information. He describes cruelly the news-starved junkie:

Hardly a man takes a half-hour's nap after dinner, but when he wakes he holds up his head and asks, "What's the news?" as if the rest of mankind had stood his sentinels... After a night's sleep the news is as indispensable as the breakfast.

Breakfast mixed with news, food with information, fat with propaganda? The man who swallows, without mincing, any kind of information, is a kind of obese, a drug-addict. There is a Thoreau's brilliant feeling about a similitude between obesity and information age:

The gross feeder is a man in the larva state; and there are whole nations in that condition, nations without fancy or imagination, whose vast abdomens betray them.

Our great man understood everything as he understood the perils and the hypocrisy of philanthropy which was then already so much praised among American elites.

So, is Thoreau, the first great thinker against the matrix? Of course, but do not forget that against the matrix you have first to be against yourself. For our private opinion is worse that the public opinion which manipulates the masses. It is our first master, says the wise American. To renounce the matrix, discover your own kingdom.

For the wisdom of this world is foolishness with God.