Citizens of poorest countries are happiest in the world

Gallup, The American Institute of Public Opinion, conducted a study to find out which country had the happiest citizens. The survey results were striking as it was discovered that citizens of the poorest countries were the happiest. The list of the happiest countries was topped by El Salvador, Paraguay, Uruguay, and Trinidad and Tobago. What is the secret of Hispanic happiness?

Specialists of the Gallup Institute released data from a study conducted back in 2011. Experts conducted a survey in 148 countries around the world to find out in which countries people were more likely to experience positive emotions. People were interviewed in person and on the phone, and each person was asked five questions, all about the ways they spent the previous day. 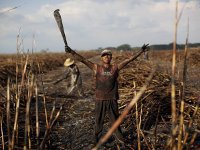 According to the Gallup, the happiest people on the planet were the citizens of El Salvador, Panama and Paraguay. These three countries were the "happiest". The top ten included 7 countries in Latin America - in addition to the above, Venezuela, Ecuador, Guatemala and Costa Rica made the list. Russia, however, did not even make it to the top one hundred of the happiest countries, occupying one of the lowest spots (along with Iran and Algeria).

First place in the ranking was occupied by a small equatorial country in Latin America - Panama, whose population is only 3.4 million people (according to 2010 census). However, despite the relatively small size of the country and small population, the standard of living in the country is relatively high. According to the studies, the birth rate in the country is 20 per thousand - 96th place among other countries. The mortality rate is low at about 4.5 people per 1000.

Panama's mortality rate is among the lowest -196th. The average life expectancy is impressive as Panamanian men live on average 74 years, women - 80. In Panama, the vast majority of the population lives in urban areas - 73 percent. The country earns its income exploiting the Panama Canal, as well as tourism, insurance, and banking. Two-thirds of the population is employed in these sectors. According to UN statistics, the per capita GDP in 2009 was nearly 12 thousand dollars, which is not bad for a small country whose level of production was only 18 per cent of annual GDP.

World analysts note that Panama is a country where people can be quite happy with their living conditions. UN experts believe that the standard of living in the country is comparable to that of North America - the United States and Canada, only the price of goods and services is several times lower. For example, a meal at an upscale restaurant is only 50 U.S. dollars, and a taxi ride anywhere in the capital is $2.

Of course, the Gallup experts noted that the infrastructure of the country and high quality of life were not the only factors that influenced the extent to which its citizens were happy. The country's favorable climate plays a significant role. The temperatures remain virtually unchanged all year round at the level of 25-28C degrees in the afternoon. Panamanians never see snow, which is not surprising, as the country is located near the equator. Dry and rainy seasons do happen on the country's territory.

In 2005, Panama won the first place in the global index of the most comfortable countries in the world. Retirees tend to move to Panama because it has one of the most developed pension systems in the world. According to the American Association of Retired Persons and the organization "International Living", the United States recognized Panama as one of the four of the world's best countries to live outside the U.S.

Despite the fact that El Salvador and Paraguay took the second and third places in the Gallup ranking, experts still say that the standard of living in these countries is low. The urban population in these countries is under 60 percent, and the economy is based on agriculture. The unemployment rate in these countries is somewhat higher, but it is easier to find a job here than in Panama - mainly in logging, and cotton and sugar cane plantations.

Average life expectancy in other Latin American countries, however, is the same as in Panama - 73 years for men and 79 for women. However, the level of health care in these less developed countries is poor. For example, this year, Paraguayan doctors sounded the alarm as the country faced an epidemic of yellow fever. According to the Associated Press, in 2012, the state government appealed to various international health organizations asking for 600,000 vaccines for prevention of yellow fever.

The results surprised the researchers from the Gallup Institute as it turned out that the happiest people live in poor countries of Latin America. If the standard of living in Panama is comparable to that of developed European countries, residents of such countries as El Salvador, Uruguay, Venezuela, Trinidad and Tobago cannot boast similar conditions. Scientists explain this by historically formed mentality of these people who see happiness in things other than material goods. According to them, people in poor countries can find joy in the moral satisfaction that often is not available to citizens of the developed countries.

Some of the world's media cited an example of two attitudes - a successful and wealthy businessman from Singapore and a poor woman who sells tea in the streets of Paraguay. "We keep working and don't get paid enough," complained the 33-year Singaporean Richard Lowe. "Wealth does not bring happiness, but only problems. Life is too short, and there is no place for sadness," said Maria Solis of Paraguay.

Singapore, Iraq and Armenia closed the list of the happiest countries in the world. It may be true that it is not the standard of living in a particular country, but the attitude of the citizens that matters.