USA takes the lead in killings of children

Over the past 10 years, four times more children died in the U.S. from domestic violence than soldiers in Iraq and Afghanistan during the war. This is the worst death rate in the developed world. This means that the myth that adopted children would be better off in the U.S. than in Russia is doubtful. In addition, no one knows what awaits these children in the U.S. 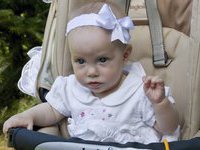 In December, the U.S. organization Childhelp that helps children affected by violence released a new report. The authors of the report wrote about a "hidden epidemic of child abuse in the United States." Annually 3.3 million reports of violence over about 6 million children are received. Every day in the country more than five children die for reasons related to violence. The authors of the study concluded that the U.S. set the worst record in all developed countries.

The most widespread child abuse is neglect of their lives and interests (78.3%) followed by physical violence (17.6%), sexual violence (9.2%) and psychological violence (8.1%).

Over 80% of the children who died of violence were under 4 years old. In approximately 60% of cases death certificate do not specify that the cause of death was abuse.

14% of men in U.S. prisons have experienced childhood abuse, as well as 36% of female prisoners. Annually in the U.S. economic loss associated with violence against children amounts to over $120 billion.

Last year, BBC journalists conducted an investigation and came to the shocking conclusion that in the last 10 years, over 20,000 children have died in the U.S. in their own homes at the hands of family members.

Journalists call poverty the main reason of such cruelty towards children, which sounds bizarre when we speak of the most developed country in the world. However, the situation is different from state to state. In particular, the authors compared the indicators in Texas and Vermont.

Texas has a much lower tax rate and, consequently, lower level of government support. As a result, children from Texas are twice more likely to drop out of school than children in Vermont and four times more likely to end up in prison. Texas has at least two times more children's' deaths caused by domestic violence than Vermont.

Journalists explain this difference by the fact that most troubled families need help but do not receive it. The children, in turn, are not protected by the government against domestic violence.

The authors of the documentary warn that blaming parents and social workers is the easiest way that would not produce the desired effect. There is a need in a special program at the federal and state level aimed at reducing children's mortality.

In this regard, the main argument of the defenders of the adoption of Russian orphans by Americans that in any case they will be happier in the U.S. than in Russia is very doubtful.

The fate of the children adopted to the U.S. from Russia in the last 20 years is unknown because there is no reliable information. According to the Commissioner for Children's Rights in the Russian Federation Pavel Astakhov, officially, 60,000 adopted Russian children left for the U.S. He believes that the number is much higher, minimum 100, 000, since in reality there is no statistics. 15 years ago 14,000 Russian children left for the U.S. each year. The fate of many of them is unknown. The Office of the Commissioner was trying to figure it out, but without success. The fate of 400 Russian children taken to the U.S. in recent years is also unknown. The statements that they are all alive, well and happy are, at least, unjustified.

Pskov newspaper "Courier" once wrote about the relatives of Dima Yakovlev, the boy who died in the United States. His grandmother wanted to take care of him, but was denied this right. Earlier she was given custody over Dima's sister. Dima's brother (their mother was deprived of parental rights) was also prepared for adoption. His fate is unknown. Upon learning of the tragedy of Dima Yakovlev, another woman told her story to the newspaper. A few years ago, her two children were taken away from her. First, they were sent to an orphanage, but six months later they were given to adoptive parents in Italy. The mother knows nothing about their fate. Pskov social services received only one letter from Italy that, according to the agreement with this country, contained information about the life of the adopted children. This letter remained unopened because local officials do not speak Italian.

Russian officials in orphanages benefit from giving orphans to foreigners because of financial reasons. For Russian adoptive parents this procedure is free, while foreigners pay more, sometimes tens of thousands of dollars. Russian officials have no interest in the further fate of Russian orphans. The stories of adoption of Russian children have too many stakeholders on both sides.