On the mass murder of children in societies 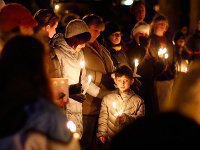 The most recent mass murder in the Sandy Hook elementary school in Newtown, Connecticut, is a frightening reminder of the very thin line between civility and insanity that seems to be all-too-common in today's day and age when not even innocent children are immune to violence.  There are many causes for the rash of mass murders.  One of the reasons most frequently cited is the prevalence of and easy access to guns here in the US (both legally and illegally).

However, if we really want to address this crisis of violence, we can't only blame guns for what happened in Newtown.  Guns are merely an inanimate tool that enables a perpetrator to painlessly, dispassionately, and, with minimal interaction with his/her victims, commit crimes, empowering the perpetrator with the feeling that there are no consequences.  Any ill and desperate individual who wants to kill will always be able to find creative ways to murder - gun (legally or illegally obtained) or no gun.  No, we must examine what would persuade a lost soul to kill innocents - particularly children - and what aspects of our cultures encourage the worst in people instead of the best.

Societies that place human welfare above profit and take care of their mentally ill,  helping  them to overcome their demons, have a better chance of preventing incidents such as Sandy Hook.  However, in many Western societies, the mentally unstable are ignored, forgotten and untreated by governments that have no problem funding military machines that fight illegal wars elsewhere but cannot help their own citizens at home.

Russia experienced a similar incident of mass murder of children of far more devastating magnitude in Beslan at the hands of Ingush and Chechen terrorists when hundreds of children were mercilessly slaughtered at a school.  When children become targets, something is fundamentally wrong, evil, and inhuman, and we need to investigate why.

To better understand how the culture of violence has internally permeated America, we can examine the actions of American leaders in their behavior toward other nations.  American leaders (and the globalist "elites" who control them) have been pursuing a very violent, illegal, and imperialistic path to dominate planet Earth using the principle that "might makes right" instead of leading by peaceful example.  Remote-controlled drones (many operated here in Las Vegas), guided missiles (such as Tomahawks used to bomb innocent civilians in NATO's illegal 1999 war on the Serbian people), even nuclear weapons, are all means to project power with minimal pain to the aggressor and exert maximal pain and minimum interaction with the victim.  When "I feel your pain" US President Bill Clinton was lamenting the slaughter of 12 children and one teacher (with many more injured) at Columbine High School in Colorado by two students there in 1999, he was hypocritically and illegally bombing innocent men women and children in Serbia at the same time.   Even Madeleine Albright, former US Secretary of State, when asked whether or not the brutal sanctions against Iraq were justified by the cost of possibly 500,000 deaths of Iraqi children, commented:  "This is a very hard choice, but the price - we think is worth it."

American society seems to be slowly unraveling as the corporate-controlled mainstream media peddles fantasies that glorify violence and teaches the message that this is the only way to solve problems.  It should come therefore as absolutely no surprise that Adam Lanza, the culprit in the Newtown mass murder, wanted to be a Marine, not realizing that Marines do a lot more than just use weapons - they serve their country.  Children are sold toys and video games that encourage mean, anti-social and spoiled behavior.   Is it honestly any surprise that we have incidents (not only in the US) such as Newtown when we live in a mean-spirited world that celebrates selfishness over sacrifice and that uses technology (including guns) as a means to isolate, insulate, and distract individuals from reality and to solve human problems?

Our generation is not the first to suffer from the terror of mass murder of children.  One example of this includes the methodical and systematic execution of over 300 high school children and 18 of their teachers by the Nazis in Kragujevac, Serbia during WWII.  Also, the Nazi puppet "Independent" State of Croatia (NDH) established the Sisak children's concentration camp in Croatia specifically for the slaughter of Serbian, Jewish and Gypsy children to fulfill the objectives of the genocide of Serbian Orthodox Christians, Jews, and Gypsies on the territory of the NDH.  In Nazi Germany, God was replaced by Hitler.  In Croatia, God was replaced by "Dr." Ante Pavelic, Croatia's fanatical and thoroughly insane "Fuhrer." His "good" work is still being celebrated to this day.   The Nazis also had concentration camps set up for children.

Today, we worship the Golden Calf of materialism, and as such, there is little or no morality left to sustain society, which will cause its inevitable collapse as society needs a moral code to encourage its members to be good citizens and to cooperate.  Instead, many of our citizens trample and kill one another in the maddening rush to acquire "cheap" goods that will end up in the trash heap months later.

During this season of introspection, I pray that my fellow Americans and other citizens of the world will rise above the materialistic jungle and culture of violence that is devouring and devolving us into animals and work together to demonstrate that love and cooperation can conquer all of our society's ills.   More fear, guns and bombs are certainly not the solution.  Love is.