During his recent working visit to Turkmenistan, President Vladimir Putin expressed his content with the development of CIS, the Commonwealth of Independent States. "I note that this is the first time Turkmenistan has held the CIS presidency, and it is certainly doing a very effective job," Vladimir Putin said in his opening speech at the summit. 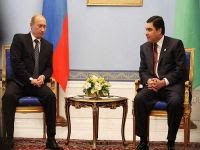 President Gurbanguly Berdimuhamedov, who has been governing Turkmenistan since 2007, was certainly glad to hear this compliment. Until 1991, Turkmenistan was a Soviet Republic and declared its independence after the dissolution of the Soviet Union.

Half of the irrigated land is planted with cotton. Turkmenistan is the world's 9th largest cotton producer. During 2011, it grew 1.1 tons of raw cotton. In 2012, the country purchased about 7.000 tractors, 5.000 cotton cultivators and 2.200 other machines for agriculture, mainly from Belarus, another CIS member state.

At the CIS summit, the presidents, Alexander Lukashenko of Belarus, Emomali Rahmon of Tajikistan, Islam Karimov of Uzbekistan, Nursultan Nazarbayev of Kazakhstan, Serzh Sargsyan of Armenia and Viktor Yanukovich of Ukraine, were also present.

CIS was established in December 1991, to promote economic and military cooperation between its member states. At the summit in Turkmenistan, a package of documents was signed, particularly on security, as well as law and order, including an agreement to establish a common financial intelligence agency for the prevention of money laundering and terrorism.

The summit was held in Ashgabat, Turkmenistan's capital city near the southern border with Iran, located between the Karakum Desert and the Kopet Dag mountain range. The population of one million is mainly composed of Turkmen, with ethnic minorities of Russians and Armenians.

President Vladimir Putin lauded Ashgabat in his speech at the CIS summit, "It has been a long time since I last visited Ashgabat, and I must say that the city makes a very pleasing impression. It is developing rapidly and according to a common plan. The city looks very beautiful."

Ashgabat was built as a fortress by Russian soldiers in 1869, and developed to become a regional centre because of its close proximity to the border of Persia. In 1917, Soviet rule was established in Ashgabat. Since 1927, when the Turkmen SSR as Soviet Republic was established, Ashgabat experienced rapid growth and industrialization.

Now Ashgabat is a modern city, primarily a government and administrative centre. It is a major stop on the Trans-Caspian Railway. Turkmenistan Airlines has its headquarters in the city, which is served by Ashgabat Airport.

Turkmenistan is doing well economically, due to its wealth of natural gas, oil and energy resources. The South Lolotan gas field is the world's 2nd largest gas field. The estimated reserves are 21 trillion cubic metres. The Turkmenistan Natural Gas Company, Türkmengaz, controls gas extraction and production, which is the most dynamic and promising sector of the national economy. The gas is sold to China, Russia and Iran.

Turkmenistan's oil is extracted by the State Company, Türkmennebit, from the oil fields at Balkanabat, Chekelen and Koturdepe. They have a combined reserve of about 700 million tons. A large part of Turkmenistan's oil is refined in the Turkmenbashi and Seidi refineries.

The CIS meeting in Ashgabat was the concluding event for Turkmenistan's presidency. In 2013, Belarus will take over. The summit participants also approved the declaration of 2013 as the Year of Environmental Protection.

Of course, economic cooperation was a core topic at the summit. The agreement on a free-trade zone within CIS gives all member states the possibility of knotting close business ties.

"We will take another step to strengthen our economic ties today by signing the agreement on cooperation in organizing an integrated currency market in CIS. This agreement's practical implementation will help us to make use of our national currencies in carrying out commercial plans," Vladimir Putin announced.

Furthermore, he referred to the Customs Union and encouraged CIS member countries to join it. He also informed everybody about the outcome of the APEC summit, held in Vladivostok in October 2012.

"The Asia-Pacific region continues to grow, and we all realize that to a large extent this is where the global economic future lies," according to the Russian President, Vladimir Putin.

In addition, he drew the members' attention to the future of Russia's GLONASS satellite navigation system, "Using this system's potential offers big economic benefits by helping us to cut freight transport costs in all of the different transport systems and increase transport security." President Putin invited the CIS members to make use of GLONASS, whenever possible.

GLONASS, Globalnaya Navigatsionnaya Sputnikovaya Sistema, is the radio-based satellite navigation system, operated for the Russian government by the Russian Aerospace Defense Forces. Its development began in 1976. During the year 2000, under Vladimir Putin's first presidency, the further development of GLONASS was made a top priority.

By 2010, GLONASS achieved 100 percent coverage of Russia's territory. In October 2011, the full orbital constellation of 24 satellites enabled a full global coverage. The latest upgrade of the GLONASS satellites is the version GLONASS-K.

The first commercial Russian-made GLONASS navigation service for cars, Glospace SGK-70, was introduced in 2007. Now the Russian government is actively promoting its use.

One more topic at the CIS meeting was military cooperation. The CIS has a Council of Ministers of Defence, to coordinate defence policies and military development. A joint air defence system is active in the CIS member countries. They held the "Clear Sky 2012" military exercises in Kazakhstan, October 2012.

All in all, President Vladimir Putin can be very satisfied with the outcome of his policies within CIS. The year 2013 will give new impulses to this organization, as the presidency rotates from Turkmenistan in Central Asia to Belarus in Europe. Will the President of Belarus set some European accents? CIS, after all, spans both continents, Asia and Europe.