The situation on the Russian market of sex services may soon dramatically change. Prostitutes will not be cheaper, and the moral climate in the society will not get better. Instead of vulnerability before the officials and clients, prostitutes would have "safety certificates" and those enjoying their bodies would have confidence that they are not dealing with a hotbed of sexually transmitted diseases and HIV. A conference to discuss the initiative on the development of a law on legalization of prostitution was held in Moscow under the motto "legalize prostitution - collect taxes". The idea was supported by a State Duma deputy from the party "United Russia" Joseph Kobzon.

The initiative on legalization of prostitution and the conference was originated by the fund "Morality Police." The document of the organization, called a draft federal law "On state regulation and control of sexual services" suggested calling prostitutes "individual entrepreneurs engaged in providing sexual services," and their clients - "consumers of sexual services." The authors of the bill proposed to consider underground prostitution only sexual activities meant to obtain "income in the form of money or other material benefits." The bill addresses the relationship between "entrepreneurs" and "consumers" as well as tax and other government agencies. 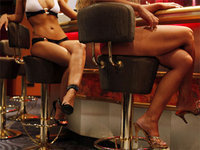 Duma deputy Joseph Kobzon supported the idea of ​​the bill with reservations. He noted that the bill was just an excuse to start a great debate, perhaps even a referendum. "As soon as the State Duma starts drafting a law on prostitution, it will immediately raise the question of the need of its approval in the second reading by the government and presidential administration. Once the government feels that this law has a financial component, [...] that there will be a need to allocate money from the budget to combat prostitution, it will be voted down," said Kobzon. According to him, the money will be needed first of all for the maintenance of the new police unit - morality police.

Speaking after Kobzon, spokeswoman of the informal union of sex workers "Silver Rose" Oksana Yartseva noted that taxes that are rampant in prostitution "settle in the pockets of corruption."

De facto prostitution flourishes in Russia, and the existing laws are obsolete. In the current Russian legislation Article 6.11 in the Code of Administrative Offences provides for a fine for prostitution between 1,500 and 2,000 rubles. There are two articles of the Criminal Code against pimps and keepers of brothels. They are "Involvement in prostitution" (up to a maximum of eight years in prison) and "Organization of prostitution" (ten years).

The conference overlooked the fact that talking about prostitutes we normally think of women, and thinking of customers we think of men only, which is not quite true. Everyone knows about the existence of male prostitution - and not just for the gay.

Sociologist Olga Kryshtanovskaya was among the most prominent opponents of legalization of prostitution at the conference. She did not like the fact that "it can be done by any girl who graduated from high school." The opponents of this bill have two main arguments. The law on the legalization of prostitution is contrary to the traditional moral values ​​and would lead to a greater spread of this vicious phenomenon. Ms. Kryshtanovskaya who specializes in the study of elites also mentioned sex tourism: "Would we face a huge influx of migrant sex tourists who will be coming along with their male migrant workers? How will it impact our demographic situation?"

In contrast to the arguments of morality and increasing number of prostitutes, the rhetorical question of Olga Kryshtanovskaya is very pertinent. The first oldest profession safely existed from time immemorial and, apparently, in one form or another will exist as long as the human race exists. As for Christianity, according to Jesus, individual prostitutes have a chance to enter the kingdom of heaven before priests and the elders. The spread of prostitution, as noted by Joseph Kobzon, is affected by social problems.

As long as Russia stays a poor country, the officials should think hard before legalizing prostitution. Otherwise, Russia can turn into semblance of Thailand that has become the center of world sex tourism. Russia should also look at the experience of Germany. Prostitution in Germany is legal in Protestant lands and prohibited in Catholic Bavaria. However, the ban does not lead to the destruction of brothels but, rather, drives them underground.