Is there a cuisine in Britain?

What to expect from a country that is home to fish and chips, bangers and mash, toad-in-the-hole (sausages in batter), Cornish pasty (meat and vegetables wrapped in pastry), Ploughman's Lunch (a hunk of bread, a hunk of cheese, onions and pickles) and, horror of horrors, up north, the chip buttie (a sandwich of French fries)? 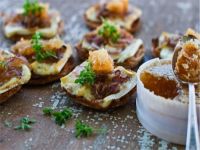 So where is all this wonderful stuff when you go to London, where you are more likely to find an Italian, Greek, Vietnamese, Romanian, Russian, or Indian restaurant, a Thai take-away, a Chinese-Japanese buffet, Portuguese café, Mongolian grill-house or French bistro, or a Wimpy or McDonald's, than one serving English or British fare, unless you go to a pub for Pub Grub.

And there's the rub. The visible side of English or British cuisine is precisely that, listed in the opening paragraph, the type of dish one encounters on a rush between the National Gallery and the British Museum. The British equivalent of fast food outlets, providing instead of the hamburger and chips or McFishburger in McFood Outlets, sausage and chips, fish and chips, bangers (sausage) and mash (potato puré), chicken and chips and anything else that can be prepared and served within 15 minutes, coming out of a vat of hot oil. With chips.

But is that British cuisine? The question is, while other nations are proud to present a list of five, ten or fifteen national dishes which take up to two hours to cook, which are their culinary ambassadors (do the test, how many can you name?), English or British cuisine has a host of easy and simple dishes which can be slapped on a plate within five minutes and then a hidden universe of possibilities using hundreds upon thousands of different combinations of savouries or sweets.

The ambassadors of British cuisine are perhaps English breakfast, the Sunday Roast (roast meat or chicken, roast potatoes, vegetables, served in gravy with aromatic herbs for seasoning) and one of these is Roast Beef and Yorkshire Pudding, served with horseradish sauce, gravy, roast potatoes and fresh vegetables... and here we start to see that British food is more than slap-it-on-a-plate and hope for the best.

For the Sunday roast is a delicate blend of some of the freshest, most succulent meats Europe has seen, fresh vegetables mingling the aroma of the earth in which they were grown with the fine herbs with which they were seasoned, embedded in gravy, the rich juices of the meat, roasted, combined with seasoning... and mustard, or mint sauce, mint jelly, jams, jellies, sauces, relishes.

And moving further away from the fast-food pub grub, there is Shepherd's pie (lamb), cottage pie (beef), meat pudding (cooked in a pastry made with suet), there are stews with dumplings, there are hams, bacon, cured meats, cured sausages, there is black pudding (blood sausage), there is white pudding, there is Lancashire hotpot.

And the list goes on and on and on and on and on...so for those who said English cuisine does not exist, or else is "horrible", dream on... The question is, it has to be cooked and served within minutes to preserve its flavours and that renders it useless in restaurants waiting for customers to appear. Where to find it? Get the hell out of London and go looking!