Cathy Breen from Voices for Non-Violence was late to hear of Hurricane Sandy and of its impact on the Manhattan community where she lives. She was in Najav, in southern Iraq, where, as the rest of the country, the electricity is intermittent to non-existent, nearly ten years after the invasion which wrought its final near extinction.

When she finally hooked up to the outside world, her host laughed, remarking without malice, "Maybe we can send them some of our electricity."(i)

In the fleeting window of cyber opportunity an email arrived from a friend in Basra, Iraq's beautiful, battered second city. Electricity was on his mind too. In the summer the high humidity and temperatures which can exceed120f (50c) lack of electricity "neither cools temperatures or temperaments." As winter approaches the desert chill envelopes.

Electricity and clean water had not, apparently, been part of US policy for the city where the first planning priority on crossing the border from Kuwait in March 2003, was to secure the oil installations.

Hurricanes and their destruction are, of course, an act of God. Destroying the entire infrastructure of nations, in bombardments and invasions, are acts of men and women, planned with malice to the last detail.  In 1991, the attack on Iraq included the destruction of the power grid (electricity was entirely destroyed across the nation within an hour), with a detailed blueprint to destroy Iraq's water system meticulously executed.

Both accomplished the embargo rendering reconstruction impossible. Iraqi ingenuity cannibalized bits here and there and electricity wobbled on and off for the twelve years until the invasion's further decimation, then the lights largely went out all together.

Repair wherewithal for the water system was blocked, banned, embargoed, (as had been planned) and as electricity, re-bombed on an ongoing basis, Typhoid and cholera, virtually eradicated by 1989, again stalked Iraq's children - now, post "liberation," described by UNESCO as "endemic."

So whilst every individual, unimaginable tragedy is just that, Hurricane Sandy, which of course, hitting America was billed a world event disaster ("Frankenstorm," and "Superstorm") with, a week later 1.8 million still without power in New York Mayor Bloomberg's baileywick. With over forty thousand despairing homeless, "inadequate relief response" provoked "widespread anger ... residents marooned in waterlogged homes, without electricity or heat ..." (ii) a certain cynicism was unavoidable. A temporary experience of Gaza, Afghanistan, Iraq, Libya, Syria - with Iran threatened with unimaginably worse.

There were warnings about the dangers of the water and that boiling it (if you could) did not eradicate serious, even potentially lethal health risks.

But cynicism abated as messages arrived from people affected reflecting understanding of the plight of other countries, and thinking about how it must be to be like this year after hopeless year.

It further abated with the stories of medical staff, electricity and elevators lost, carrying patients to safety down flight after flight of stairs, keeping life saving equipment going by hand, and with the speedy way neighbourhoods, churches, individuals found ways to create drop points and deliver blankets, food, aid, often by word of mouth, in the lack of any other way to communicate.

There was a certain human inter-connectedness about a nightmare situation, miles long queues for petrol - as again, the countries that have been destroyed for their oil and assets - and many affected on the US East Coast making the connection. On the 3rd of November, a government survey found there was no gasoline at two-thirds of the stations in New York.

Yet for government, media and indeed the now second term Nobel Peace Prize President, this is still an all American tragedy. Under an hour's flight away, devastation for some is intractable.

In Haiti, still largely collectively staggering from the 2010 earthquake, seventy percent of crops in the south of the island were destroyed, including staples such as  bananas and maize, with a huge loss of livestock. Haiti's food insecurity is already of critical concern to agencies.

Further, floods and unsanitary conditions are likely to exacerbate a cholera epidemic which has killed 7,500 people since late 2010, with hundreds of new cases being registered weekly. Nearly 400,000 people are still living in makeshift shelters nearly three years after the quake.

Storm water flooded, damaged or destroyed over 18,000 homes, according to Jens Laerke, of the UN Office for the Coordination of Humanitarian Affairs.

The UN itself in Haiti has been under fire since, according to a leading US cholera specialist, Dr. Daniele Lantagne, the most likely source of the introduction of the outbreak of the devastating cholera epidemic was the Mirabalais camp for UN soldiers from Nepal, a country where cholera is widespread. (iii)  Dr. Lantagne was also employed by the UN in 2011 being one of the world's pre-eminent experts on the disease.

With a population of just ten million, the Haiti cholera outbreak is assessed the largest in the world, exceeding cases on the entire African continent.

"Prior to this outbreak, and despite Haiti's many other problems - including a devastating earthquake in January 2010 - the country had not recorded a single case of cholera for over a century.  Cholera is spread through infected faeces and once entering the water supply, it is difficult to stop - especially in a country like Haiti which has almost no effective sewage disposal systems."

Haiti Relief and Construction Watch (iv) reports that full hurricane damage is inestimable due to road and infrastructural destruction - and money for cholera treatment may be running out.

They also point out that being:"newly homeless means more people thrown into a state of vulnerability (not alone to) cholera and other illness and disease, vulnerable to rape and gender-based violence, vulnerable to hunger, and vulnerable to forced eviction when/if these people move into displaced persons settlements."

Strangely silent and forgotten is the "Clinton Bush Haiti Fund" (v) founded in the aftermath of the January 2010 earthquake, at the request of President Obama, who asked former Presidents Bill Clinton and George W. Bush to: "join forces and lead a major fundraising effort to assist the Haiti people."

"The Clinton Bush Haiti Fund is dedicated to empowering Haiti to chart its own successful future. We do this by making catalytic grants and investments for long-term reconstruction and economic expansion. We work to support the Haitian people's efforts to rebuild their own country."

Not apparently for the small island nation in a "Frankenstorm." In spite of an appeal for emergency aid from Haiti's Prime Minister, the Fund's website, as personal statements are, at the time of writing, still mute on this further disaster.

In the Dominican Republic and the Bahamas (populations respectively little over nine million and just 347.146) also suffered extensive damage, with many communities relying nearly entirely on fishing, losing not only homes, but boats and thus their livlihood.

The island's imaginative, well honed disaster relief efforts moved to counter initial devastation, with Venezuela sending in fourteen tons of aid within twenty-four hours, but much is still needed.

All in all, it was a pretty democratic hurricane for the less privileged, whether America's East Coast or its island neighbours. But the lights on the New York Stock exchange lit up within forty-eight hours, with Mayor Bloomberg ringing the opening bell, as stock traders cheered from the trading floor.

Within sight, lights were still off, residents shivering in waterlogged homes and ATMs still not functioning. Arranged food distribution was hampered because the Mayor had closed charity warehouses which received food donations, allegedly on the basis they might contain too much salt or sugar and affect the health of the hungry.

As Presidential election day, the 6th of November, approached, in Nassau County, Long Island, New York, not only residents, but nine out of ten polling booths were also reported without power.

Ironically, as an aside, the UN Security Council was based temporarily in Nassau County from 1946-1951. On the 27th of June 1950, the Security Council backed President Harry Truman in sending forces to the Korean Peninsula, leading to the Korean war, switching out the lights in another far away country that posed no threat to the United States.

But on the 6th of November, hugging while the suffering in what was billed a "good storm" for Obama, was long forgotten, Obama hugged his wife and privileged young daughters in victory - and the Empire State Building was lit blue, illuminating all still in the dark within its glowing orbit.

And will the lights also go out in Syria and Iran during his new four year reign?

"Change we can believe in," at every level, seems more elusive than ever. 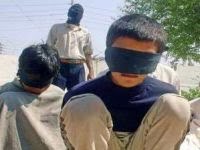