Russia's Anastasia Zavgorodnyaya and her newborn baby were placed in a closed shelter that was located in a basement. The woman is not allowed to leave the shelter. She can see her other children under the supervision of social services, who record their every word. The mother's imprisonment may last up to six months while custody services investigate her case. 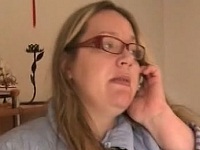 Each piece of news that comes from Finland is more horrifying that the previous one. After representatives of the Russian Embassy in Helsinki happily reported that Anastasia Zavgorodnyaya, who had her four children taken away from her by Finland's custody services, was allowed to live with their children in a shelter, joyless details emerged in the woman's story.

Rimma Salonen, who also has been fighting for years for the right to raise her son, managed to talk to the woman on the phone. Here's what she told us:

"Anastasia is staying in a closed shelter in the basement - she is in a bunker with a newborn baby. This is a Finnish prison. She is completely isolated. She can meet her elder children under officers' supervision. The meetings are allowed only during the daytime, for a few hours. The family meets in the bunker. In the evening, they take the three children away from their mother.

"Her three elder children are staying in another shelter, also under strict control. During their meetings with the mother, social workers record their every word. This is being done to accuse Anastasia at first opportunity that she sets children against custody.

"The woman is not allowed to go out of the bunker. We do not know how long she is going to stay in this prison. According to Finnish laws, custody services may conduct their investigation for two months. If they decide that it is necessary to sue the Russian woman to deprive her of parental rights, then the investigation may take six months."

Will the woman be able to survive the isolation? It appears that the Finnish social services intend to take Zavgorodnyaya to the point when she has a nervous breakdown. In this case, it will be easy to recognize her as a person with unstable psyche. This reason could then be used to finally take the children away from the woman.

It is worthy of note that the Finnish custody services have no official complaints against the Russian woman. The reason for taking the children away was the phrase that Anastasia's six-year daughter said when she visited a speech therapist: "Daddy slapped me on the butt." This is stated in the protocol. Afterwards, social services took the little girl and her two twin brothers away from the woman. A week after the birth of Anastasia's fourth child, custody officers came and took the baby away too.

At first, the mother was allowed to see the children who were placed in an orphanage. The woman could see them every day through the bars. Moreover, they said that the woman would not be allowed to breastfeed her newborn baby.

The Russian Federation authorities interfered. The story sparked outrage and received an extensive coverage in the Russian society. The Finnish custody supposedly decided to make concessions. Now it turns out that they simply shut her away in a bunker.

Apparently, this is the way the Finnish social services are punishing the Russian woman for her decision to ask the Russian media and embassy for help. In Finland, there is a legal ban on the delivery of children-related information to unauthorized persons, including the press and embassy employees.

Representatives of the Finnish authorities say that all this is being done solely in the interests of the children. But in doing so, they get full impunity: no one has the right to discuss their actions, while they are not obliged to comment and explain their actions.

We would like to bring to your attention the fact that Russian human rights organization received complaints from 36 Russian families, from whom 51 children were taken away in Finland. Russian families are at risk in Finland, since the local Social Welfare Ministry officially said that in Russia it was considered normal to beat children and that the Russian authorities encourage such behavior. Therefore, a phone call from neighbors or schoolteachers is enough to take a child away.

Incidentally, name of Finland's Minister for Social Welfare is Maria Guzenina. She was born in Helsinki into the family of a Russian woman and a German man. She prefers to carry her mother's surname; she also goes to a local Orthodox church.

During the TV show called "On the air" - the show was devoted to the issue of Russian children in Finland - an employee of Finnish social security service reported that a Russian family had been recently deprived of their own children, because the children went to an Orthodox church and observed a fast. The Finnish custody services considered it child abuse.

It seems strange that Minister Guzenina, being an Orthodox believer, did not explain to her colleagues that fasting was not an act of abuse. In one of her interviews she said that she had a difficult childhood, because her father was a violence-prone alcoholic. She also said that when a child, she had no friends. The main thing in her life, as she said, was a search for love.

Indeed, how can a person with such a negative family experience show sympathy to the women who have their children taken away from them by child protection services?