Former Marine of the U.S. Army Patrick Downey appealed to the President of the Russian Federation asking to grant him political asylum. Patrick told Pravda.Ru that at home he was facing severe punishment. Downey said that it was caused by the material he intended to publish about the U.S. support of the Georgian leader Saakashvili, including the war with South Ossetia. 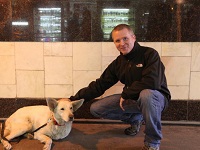 Patrick Downey is a nice young man who speaks some Russian.

While Patrick does not read Russian newspapers, he still thinks they are free press unlike those in his home country.

"You have lots of newspapers, but you write about various things, including the views that are not shared by your government. This, I believe, is freedom. In the U.S., there is a taboo: no writing objectionable things about corporations or people close to the White House - it's suppressed, at times, in a very tough manner. Our country is ruled by banking syndicates and this is a real problem."

"This is not my first time in Russia, but this visit is due to the fact that my life is in danger and I need help," he said.

Downey used to work at the American embassy, ​​but said that he was disappointed in the civil service, and then took a job as a private teacher of English to Georgian oligarch Bidzina Ivanishvili and moved to Tbilisi. There Downey obtained documents that gave rise to greater problems in his life.

The documents confirmed the fact of funding of anti-Russian activities of Ivanishvili by the U.S. In a document dated 2007, it was stated that the World Bank for Reconstruction and Development, 60 percent of whose shares is owned by the United States, transferred $12 million to the bank of Ivanishvili. The purpose of the transfer was structural development. A year later, in August of 2008, Georgia sent troops into South Ossetia and, according to Downey, again, not without the involvement of the U.S. capital, including the money that was transferred to the bank of Ivanishvili.

Downey returned to the U.S. and decided to make this information public, but faced strong opposition. Press refused to publish the sensational material. As a result, the former Marine became known to the Government, and was given the nickname Trouble Man and the attention of the U.S. intelligence that, according to Downey, tried to neutralize him.

"I began to feel that it was simply dangerous for me to be in the U.S.," said Downey. "All documents that I have uploaded online were removed, my videos on YouTube were blocked and I was threatened. The threats also came from the Georgian side, which demanded silence."

The Trouble Man tried to get political asylum in Ireland, but the authorities of the country reacted aggressively to Downey's stay on their territory, and the American landed in jail and was later deported.

"I did not want to remain silent, I wanted to tell the truth," explained Patrick. "But because of that, I had to leave my native New York and my country. I do not want to talk about the U.S. as an "evil empire," but I am trying to protect myself from the evil that haunts me."

In New York, Patrick left his family - parents and sister. Russia that Downey asked for permission to call home has not yet responded to his plea. On September 21 the American turned to the Immigration Service requesting political asylum. Despite the fact that Russia has not agreed to assist, Downey said he felt supported without official documents with round seals.

"In Russia, I met people who wanted to help. They are ordinary people. I want to live here, I love this country and hope for protection."

The Russians helped him to disseminate an address to President Vladimir Putin on the Internet: "Patrick has lost the support and protection of public services in the U.S., all references to violations of his civil rights and liberties by these bodies went unanswered. The USA left its own citizen who disagreed with the policy of the United States without protection," the statement says. "Downey appealed to the Immigration Service of the city of Moscow asking to grant him political asylum. Please pay attention to the fate of Patrick Downey and assist in the consideration of his application as soon as possible."

"I understand that if Russia gives me political asylum, I will hardly ever be able to return home," said Downey. "But I'm ready for that first of all, for the sake of safety of my family, who, like me, will not be left alone if I stay in the U.S. I am terribly hurt, I'm so far from home, but I do not have another way out."

In his interview Downey said he wanted to accept Orthodoxy.

"I met a lot of really religious people who helped me incredibly. I became interested in your culture and religion. I started going to church. It is my conscious desire, I just feel that I need it."

Answering the question what Patrick would do if the authorities allow him to stay in Russia, he replied: "I will live! I will get married. I do not want to fight, do not want to constantly be afraid. I want a family and a home. I hope that this is what I will get.

Since the collapse of the Soviet Union Russia has never provided asylum. It is not ruled out that Patrick Downey will be the first one, and his personal "Cold War" will come to an end.