Israel continues to crack down against evaders from the army. However, sometimes this struggle takes strange forms. On September 3rd, a former citizen of the country, 30-year-old Yana Gorelik, who arrived to the country for the wedding of her cousin was arrested for evading the service. The reason of the arrest was that at the age of 17 she received a summons to the IDF. 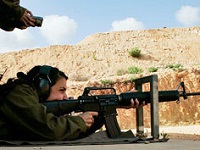 Israel continues to deal with the issue of conscription evaders. Following the abolition of the Tal Law, which allowed the ultra-Orthodox not to serve, the government has taken several measures to punish the deserters. For many years, there was compulsory military service for men and women. However, for the ladies it was much easier to evade from the army. Until recently, the Israeli woman often used the Jewish faith as an excuse to evade military service. Many called themselves Orthodox believers, not thinking about the fact that the Israeli army is in a position to verify this fact. Others lived abroad for some time, unaware that one day they will be punished for a failure to appear in recruitment.

That all changed when on September 3, 2012 military police arrested a citizen of Canada Yana Gorelik. Jana's family immigrated to Israel from Russia. When she was 17 years old, the family moved to Canada "in search of a better life." In early September of 2012, unsuspecting Yana came to Israel to attend her cousin's wedding. After the border control she was recommended to immediately come to Lishkat giyuz - a recruitment office. It soon became clear that under the law, Yana was due for military service at the time when her family left the country. Now, she is accused of a willful refusal to serve in the IDF, was handcuffed and taken to an army jail number 4. The military prosecutor's office is going to require punishment for Yana Gorelik in the form of imprisonment for a period of five months.

Russian media in Israel negatively reacted to the arrest of the woman. "Bureaucrats in the uniform interrogated the expatriate for four hours, then announced that she will be sent to prison for draft evasion where she will be kept before the trial in her case," reported the local newspaper "Kurier". As a result, Yana Gorelik's cousin, 26-year-old Anna Shakhnovich, instead of preparing for her wedding, had to attempt to free her hapless relative.

Did the Army realize the loss just now? This is not the first time that the military police pursues young people who went abroad a few years ago. Of course, while they are in another country, they are not touched, but upon the return to Israel conscripts are severely punished. According to the "Jewish Journal," in recent months, the number of complaints to the deputy Marina Solodkina from young people who went abroad with their parents as minors and upon their return, full of desire to link their fate with Israel, were sent into military prisons.

Marina Solodkina is considered a veteran of Russian politics in Israel. In the late 1990s, she took an active part in the creation of the "ba Israel Aliyah", twice served as deputy minister of Absorption, fought for the rights of immigrants from the CIS in the local parliament - the Knesset. Now MP Marina Solodkina interceded to the government for Yana Gorelik and other ex-Russians convicted by a military court of evading military service.

"This absurd situation with returning to the country of Russian-speaking immigrants who are imprisoned as deserters cannot continue. I requested a meeting with Defense Minister Ehud Barak to find out why the Russians, willing to serve in the army, are sent to prison, while ultra-Orthodox are untouchable," said the deputy in an interview with IzRus. The local press also quoted Anne Shohanovich, Jana's cousin: "What is going on is absurd. A 30-year-old female, she does not live here." "She's in a tough situation, she cries every day, she does not sleep, it is a serious condition, she is broken. We are trying to help her, but it does not work," lamented Anna Shohanovich.

Either way, the exponential case of the Israeli army against Yana Gorelik cannot be regarded as "an unfortunate misunderstanding." The number of recruits who are trying to evade the army in Israel continues to rise. Under these circumstances, the IDF leadership is resorting to the unpopular measures against deserters to discourage the others. Such policies often generate scandals that become known to the press. In March of 2012, 25-year old French millionaire David Gee Lesueur was arrested for evading military service. He lived outside of Israel for many years, but, as one of its nationals was obliged to serve in the IDF.

But this time the army judicial system has gone too far, locking up 30-year-ol Yana Gorelick who came for the wedding of her cousin. On the eve of the Jewish New Year provost Meir Ohana decided to let her go home for a few days. On September 20, the court, according to the portal Znam.com, ruled an interim solution in her case: the woman was left in jail for another week and was appointed for a medical examination that may be followed by her commissioning If she is lucky.