To kill a mocking alien

On September 12, a tragic story happened in Kolchugino, Russia. A resident of the city came to his neighbors with the news that his mother was killed by an alien. According to the man, he was trying to protect his mother and killed the alien. In fact, even the law enforcement agencies are skeptical that the alleged killer's story is a complete fiction. 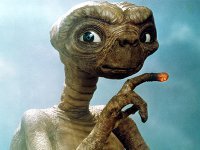 The corpse of the alien, who allegedly was in the apartment where the crime has happened, has not been found. The body of the murdered woman had at least 15 stab wounds, and large wounds on her head, allegedly inflicted by glass bottles. The son of the murdered woman was immediately taken into custody. According to the neighbors, the mother and her son often drank together, so that there is little doubt that the murder was committed under the influence of alcohol. But the story is not that simple.

"It is too early to say that the man came up with an alien to justify the killing of his mother," said the spokeswoman for the Investigative Committee, Irina Minina. "But such cases are unique. Rarely killers can come up with such excuses for their actions."

Of course, it is hard to believe. But it is possible that the son who killed his mother really hallucinated an "alien".

Ufologist Gennady Shein believes that "representatives of extraterrestrial intelligence" still could be present.

"Generally, the killings of people by UFO are very rare," he said. "Mostly these are attacks on planes or ships. But the fact that in the presence of the UFO people become aggressive is a given. Often UFOs are sited in places of bloody conflicts.

However, hallucinations related to aliens are not uncommon. For example, one Saturday night in 2003 a resident of Yukhnov (Kaluga region) called his 16-year-old son and said that the roof of the house next door had a UFO on it, emitting colored rays. He argued that he could even see humanoids walking down one of the beams, as if down the ladder. The father feared that aliens would abduct his family.

When in the building, the man's son immediately felt a strong smell of gas. It turned out the mother of the teenager left a boiling kettle on the stove. The water flooded the burner, the fire went out, and gas began to surface. As a result, of all the family members who were at home at the time began hallucinating.

Once, Anatoly, a truck driver from Chita, went to work and disappeared. Two months later he rang the bell of his door. His wife opened the door and saw Anatoly, alive and well.

He said that his truck, driven by his teammate Nikolai (Anatoly was sleeping), was pursued by a flying saucer. It moved silently over the truck, and its bottom was clearly seen in the sun, lined with white zigzag circles with a diamond hole in the center.

UFO got ahead of the truck and was hanging over the road. Scared, Nikolai stopped the car, and then, as if in obedience to someone else's orders, jumped out of the truck. At that point a bright beam of light hit through the hole in the bottom. The man was blinded by the flash and for a while lost his bearings. When his vision was restored he rushed to wake Anatoly.

After an hour of driving, the drivers got worried: according to their calculations, they should have already reached the point of destination. There were no oncoming vehicles on the road, though the track was usually busy. The sun for some reason was still up at 7 pm, and in the winter it gets dark early.

Nikolai suggested that these oddities were related to UFOs. As soon as he mentioned it, the saucer reappeared. It flew low over the highway at high speed. Nikolai, who at that time was at the wheel, barely had time to slow down. The UFO abruptly jerked up and out of sight. Immediately it was dark around. Turning on the headlights, Nikolai and Anatoly soon left the valley and saw the lights of a village in front of them.

At their destination point they were asked where they were lost for more than two months...

The men began talking about the "saucer" and driving around the "vicious" circle, but they were only laughed at. Not long after that Nikolai died of an unknown illness. Before his death, his skin was peeling off and his hair fell out in bunches. According to Anatoly, his partner was subjected to radiation when UFO flash blinded him.