It is difficult to find a country with starker contrast than India. It is one of the world leaders in high technologies, the largest importer of high-tech weapons, the country that is seriously planning a trip to Mars, but whose people are mired in poverty, and the officials - in corruption. India will have to overcome internal divisions before it is granted a superpower status. 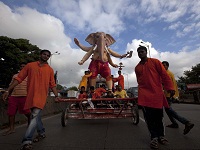 Along with China, India that lags behind its neighbor in terms of the area and population is one of the most advanced developing countries in the world. In India, unlike China, there is no single party leading the nation. India is a democratic state with a free press and independent judiciary system.

The most expensive private house is located not in New York or Los Angeles, London or Dubai. It is located in Mumbai, just a few steps from the darkest of slums in the world. The English say: "My home is my castle." The house of India's wealthiest businessman, billionaire Mukesh Ambani, is worth one billion dollars and was named Antillia after the legendary ghost island in the Atlantic Ocean. The home of the mega oligarch, who permanently resides in the United Kingdom, is a 27-story "castle" with three helicopter pads on the roof, nine elevators, a cinema and crystal chandeliers in the garage. The lower six floors are occupied by 168 parking spaces for luxury cars of the 55 year-old owner, in common parlance called Mister Big. Ambani is the owner of oil giant Reliance Industries and one of the richest men on earth. Forbes magazine in 2009 estimated his fortune at 32 billion dollars.

Only six people live in the Mumbai mansion on 37 thousand square meters: Ambani, his wife, three children and his mother. Just half an hour north of Antillia, 12,000 people are crammed into slums. There is no running water, no toilets or electricity. Over 60 percent of the 18 million residents of Mumbai, according to experts, are still living in slums.

Despite such a sharp contrast, Indian journalists are full of national pride. "The Palace of Versailles may seem poor compared to this house," enthusiastically wrote a columnist of Shobaa De.

If the Olympics are recently lead by the U.S. and China, India rightly shares the top economy status with these countries. However, the lack of sporting success for local athletes is more than offset by the strong chess school. "In India, Russia, and the former Soviet Union, chess schools are probably the world's leading. Chess has always been the pride of our people", said Russian President Vladimir Putin during a meeting with World Chess Champion Viswanathan Anand and Russian chess player Boris Gelfand, who played in Moscow for the title of the strongest chess players in the world. The Indian retained his title by defeating his opponent in the tie-break.

Indian Prime Minister Manmohan Singh has promised that no power on earth would be able to stop India from reaching new heights of progress and development. But even today India is the world's largest importer of arms. The country launches satellites, and recently announced its plans about a mission to Mars.

There are centers of high technology, such as Bangalore and Hyderabad (a city populated by seven million, nicknamed Cyberabad). Here the headquarters of the leading IT-companies, for example, Infosys Technologies Limited and Wipro, are located. These days, computer specialists who once went to California's Silicon Valley, come back here. Now in India salaries are not less than those in the U.S., and it is always better to live in the home country. India has the largest number of mobile phone users.

The Indians can choose from over 400 private TV channels. Suzlon Energy is the fifth in the world among manufacturers of wind turbines. In 2010, the Indian company came sixth in the world in terms of the total power produced per year for wind energy equipment - 2736 MW.

However, it is no secret that there is another India. The country, home to every third child in the world suffering from malnutrition, where two-thirds of citizens live on less than two dollars a day, where 25 percent of the population still cannot read and write. This is not surprising, since only very wealthy people can afford tuition at 40,000 a year.

More than half of Indians are engaged in agricultural work (they produce 14 percent of gross domestic product), and 2.5 million people are working in the field of information technology, producing 6 percent of GDP. Meanwhile, most public assistance programs for poor only exist on paper. The allocated funds disappear before they reach those for whom they were intended. The two worst things of modern India are poverty and corruption.

India is not a country, it is a geographical term. Calling India a "nation" would be equal to calling the "equator" a "nation." India is a patchwork of diversity, that, despite the obstacles, is looking for the path to unity.