Thousands protest against early release of pedophile in Belgium

Over 5,000 people  have recently participated in a protest march in Belgium. The reason was the early release of an accomplice of a serial killer and pedophile. The rally was organized by the father of one of the victims. In Europe, the problem of loyalty to justice for pedophiles is becoming more acute. Norwegian human rights groups say that in their country sex with children is not considered illegal.

Last Sunday a mass protest took place in Belgium. Over 5,000 people took to the streets to protest against the early release of Michelle Martin - an accomplice of a murderer and rapist Marc Dutroux. In the late 1990s, he turned the Belgian society, demonstrating a complete inability of the authorities to protect their citizens from crime. Marc Dutroux, called by journalists "disgrace of Belgium", for many years was engaged in the dirty business right in front of the police. If it had not been for the activity of the parents of his victims, he would have still been free. 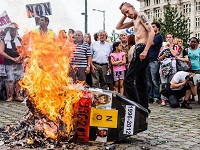 In 1980 he and his wife organized a lucrative "business": he kidnapped girls, raped them and subjected them to torture, while filming it all on camera. The "films" were sold to interested parties. A few years later he was arrested. But for five proven abductions and rape Dutroux was sentenced only to 13 years in prison. His wife was released almost immediately after the verdict. However, the husband did not stay in prison for that long either. He was released only three years later for good behavior.

In 1994, a couple of years later, the police stopped supervision of Dutroux, considering him fully recovered. In the summer of 1995 in the province of Charleroi two eight-year old girls went missing. The police never found them. The mother of Dutroux wrote a statement in which she pointed directly to the involvement of her son in the crime. But the guardians of law and order limited only with a conversation with Dutroux.

Also read: Irina Bergseth: I am not going to give up

In the same year the Interpol gave the Belgian police information that a gang that kidnapped children, headed by someone named Dutroux, was operating in the country. But even then the police did not bother to investigate. Even after one of the girls managed to fight the rapist off and pointed to him directly, the law enforcers chose to trust the words of the criminal's wife who confirmed his alibi. At this point four girls were in the basement, two of whom died three months later after a number of rapes and torture.

The parents of one of his victims started their own investigation. They found a witness of the abduction who remembered the license plate number. Only under pressure from the public the police finally raided the house of the monster. Two other girls from the basement were saved. In the garden the police found the buried bodies of several other victims.

In those days, almost all of Belgium took to the streets. The angered citizens, shocked by such an egregious omission by the police, forced the entire cabinet to resign. There were heated discussions about the introduction of the death penalty in the country. As a result, Dutroux was sentences to a life in prison, and his wife and accomplice - 30 years in prison.

Now, after serving nearly a third of that time, she was released yet again for good behavior. Not surprisingly, many Belgians have apprehended the injustice as a personal insult. A protest march was organized by the father of one of the dead girls. One of the participants of the procession was Russia's Ludmila Moiseenko, who came with a banner: "Shame on the Belgian and French Justice! Stop sexual violence against our boys!"

Earlier "Pravda.Ru" told the story of the woman who accused her daughter's husband of sexual activities with respect to their young son. But Belgium justice chose to protect not the four year old child, but his father, dismissing all the evidence, including the results of the medical examination that were later classified by court. By a court decision, the father can have the child two weeks every month.

Another Russian, Irina Vinogradova, who lives in New Caledonia (French island in the Pacific), is trying to save her son from the father-pedophile. As a result, the court gave the boy to another family. In this case, the mother is allowed to see him twice a month, and the father - every week, in addition to overnight stays.

Experts confirm that allegations of this kind are almost impossible to prove in court. If police failed to see the murderer and rapist operation right in front of their eyes, the intra-family offense is not investigated at all.

Norwegian defender Greta Glas attributes this to the fact that in the European Society sexual crimes against children are no longer considered something illegal. Irina Bergset, whose dramatic story was widely reported in the Russian press, turned to her for help.

Acts of sex violence committed against children in Norway are extremely difficult to prove (impossible), because they occur in families and among close relatives. It will take many, many years (and it often does not occur at all) before the child grows up and talks about the rape.

When you cannot find evidence of a child rape (meaning infancy, pre-speech - from zero to two years of age, or early speech between two to four years of age), it looks like one opinion against another. In this case, it all depends on who the judge believes - a "hysterical" mother from Russia, or the Norwegian father. Norwegian justice will never take the side of the parent who is not a Norwegian citizen, either the mother or the father (this has never happened in the history of Norway). "

As advised by human rights activists, a mother needs to forget about the accusation of pedophilia for her own good. The only thing she can fight for is the right for correspondence with her son, and even then this is likely to take recourse in the Strasbourg court.