Drug addicts: From clinic into vacuum

20 years ago the first group of "Drug Addicts Anonymous" was formed in Moscow. Every week in Russia over a thousand community meetings are held in 142 cities. The effectiveness of this technique in combination with medication was formally approved by the Ministry of Health. It is believed that every other addict can achieve at least one year of remission. 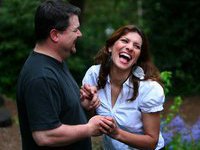 Looking at the frail, smiling Eugenia, it is impossible to imagine that a third of her life was given to drugs. "I have actively used drugs for ten years. Six years ago, I had no friends, no family. The last few months before joining the "Drug Addict Anonymous" I lived on the stairs because I was kicked out of my house," said Eugenia.

She was lucky - not only she survived, but returned to normal life, obtained education, found a job, and got married. According to her, none of this would have happened if it were not for the community: "I have always been persecuted everywhere. And then I was listened to for the first time. And I wanted to learn to live without drugs."

"Drug Addicts Anonymous" was created in the 1950s in the United States, by analogy with "Alcoholics Anonymous". Today there are many of these communities, as well as all kinds of addictions. There are anonymous gamers, sex addicts and gluttons.

The method is always the same - a 12 step program. The main steps are the recognition of the problem of dependency and inability to cope with it on their own, seeking help, honest look at themselves and change in their behavior.

People get together and begin to talk honestly about their misfortunes. Apparently, in this lies the secret of the success of the technique. The addicts do not sit around the condescending professionals, but victim just like they are, who fight their own personal battle every day.

"We never tell them: give up drugs forever. We only suggest that they try to live without them today. And it works," said Dmitri, who joined this community 13 years ago and since then has not returned to drugs.

To celebrate the 20th anniversary of the Russian community in Moscow, the first annual conference of the European members of the community with 2.5 thousand guests from 20-plus countries around the world is held from 17 to 19 August.

Wolfgang, who came to the conference from Berlin, has been drug-free for 23 years. This is the best proof that the technique really works. He said: "I'm happy to grow old in this community." 23 years ago in the midst of his struggle with addiction, he tried everything, read many books on psychology and as a result gave up on conventional methods of treatment. "I easily gave up drugs, but could not live without them," he said.

This is the main problem for those trying to get rid of the addiction. "We treat people, but then release them from the clinic into a void. They cannot communicate with the old friends who use drugs, and they simply do not have other ones," said the director of the Moscow Scientific-care Center on Addiction Eugene Brune.

He believes that without the help of the community doctors' work is ineffective. According to the Center on Addiction, if the national average of annual remission after treatment is approximately 11-15 percent of drug addicts, among the members of the community, this number is much higher - up to 48 percent.

In the center of Addictions a division for the community will soon be open where members can meet almost any time.

Two years ago the community "Drug Addicts Anonymous" appealed to the Federal Penitentiary Service for a permission to allow them to help prisoners suffering from drug addiction. According to the Federal Penitentiary Service, every third offense in Russia is committed either by a drug addict, or by a person under the influence of drugs. Another major figure is 60 percent of the addicts in custody are young people under 25 years of age. The age is the main difference between Russian and Western members of the community: in Russia the associates are much younger.

Anyone in need of assistance can become a member of the community "Drug Addicts Anonymous." There is one main condition: the person must want to get rid of their addiction. This is the main difference from the method of Eeugene Roizman. He is confident that drug addiction is not a disease but a behavioral disorder that can be "corrected" with hunger and handcuffs.

"Drug Addict Anonymous", in turn, say that it is impossible to force people to give up drugs. They do not call themselves cured, but "recovering addicts". This means that they regularly require the support of their "friends in misfortune." "If you feel bad, you need the community, if you feel good - the community needs you," this simple truth is the essence of such groups.

The international conference will be visited by hundreds of Russian participants from all over the country. First of all, they want to communicate with people like Wolfgang who managed to stay drug-free for 23 years. Hence, they also have a chance.