Thursday August 9 was the day Bolivia held the International Day of Indigenous Peoples, in compliance with a mandate from the General Assembly of the United Nations Organization, which sets Aug. 9 as the date of commemoration.


In this city, La Paz, thwe Bolivian capital, different social organizations carry out activities, particularly in the Plaza San Francisco, where sports people, artists and intellectuals, among others, meet.

The day includes a ritual to Pachamama or Mother Earth, the inauguration of a photo exhibition dedicated to indigenous peoples, and other traditional activities.

In the evening there was a Radial Forum called Media and indigenous peoples of Bolivia.

The MP for the Movement Toward Socialism Jorge Medina celebrated the recognition of indigenous peoples and prepared a presentation that was given to the various Indian nations making up the Multinational State.

Medina, the only Afro-Bolivian legislature, recalled the achievements of indigenous communities after the arrival to power of President Evo Morales, in 2006, and approval of the new State Constitution, which recognizes 36 indigenous nations that are part of the country.

"Hopefully it becomes a reflection on the inclusion of indigenous peoples in the new state model, and an analysis of what still remains to be done for our people," said Medina.
Source: Prensa Latina 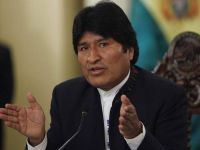 Translation from the Spanish