Burgers, jeans and high heels all the rage in North Korea

DPRK leader Kim Jong Il, must be turning in his grave. No sooner had his son Kim Jong Un assumed power, when he dared to try to destroy the most sacred thing in the country - the "iron curtain". Now the people of North Korea can have burgers, use cell phones, wear jeans and high heels. It is quite possible that the North Koreans may go crazy because of so many unimaginable things that they can now enjoy. 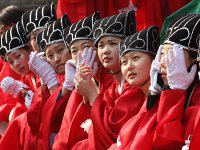 While the power in the country belonged to Kim Jong Il, the ideas of Juche and bright future of communism would be actively implanted in the mind of the Korean society. Rumor has it that security agents would follow not only tourists but large groups of NKorean citizens too. The people themselves would suffer from hunger and live in total poverty. After all, the leader of North Korea would appropriate all the money or spend it on the nuclear program.

We will never know whether it was true or not. Like the Soviet Union, North Korea would never lift its iron curtain for the West, not even a little bit. When the grandson of the "Great Leader" Kim Il Sung took power, he wanted to beat his father. He decided to to "re-brand" the country.

Kim Jong Un, who was born to Kim Jong-Il's third wife, was apparently longing for the Western culture. Unlike other North Korean children, he was familiar with Mickey Mouse, McDonald's and other pleasures of the American dream. In addition, he finished school in Switzerland, and went to college in North Korea. There is nothing surprising about the fact that  Kim Jong Un was dubbed a new Gorbachev. He began actively working on the reforms after the death of his father.

First, he eased a number of laws so that his government would not be associated with Third World countries or dictatorships. In particular, more and more North Korean women wear trousers, platform shoes, high heels and earrings. The number of cell phones grows in the country every day, and citizens can safely feast on pizzas, hamburgers and French pastries. That was impossible to conceive a year ago.

Thus, he paid first priority attention to women who are sure to become his admirers. If any election is ever held in North Korea, they will vote for him. The younger generation, which in the future will be associating him with his own country, will never be something excessive. In present-day North Korea, children go to zoos and movie theaters - absolutely for free. Kim Jong Il called himself the Supreme Leader of the North Korean nation. His son wants his own people to call him that.

The West is happy to look at these changes. Western regimes hope that the weakening of the North Korean regime will lead to its collapse. Washington pins big hopes on the youngest head of state in the world. The US administration believes that the new leader of North Korea will be able to lift the orders of Kim Jong Il about the creation of the arsenal of uranium bombs, abandon its nuclear program and merge in ecstasy with Seoul. The latter is even willing to pay for this merger, like Germany did after the fall of the Berlin Wall.

Two years ago, the South Korean leader Lee Myung-bak announced the price for the unification of Korea - one trillion dollars. It is unlikely that the country has so many available money despite its strong economic growth. This means that the United States will help with the financing, because in the end America will get its money back with the help of transnational corporations that will be admitted to the united peninsula.

Meanwhile, South Korea is ready to allocate $ 40 billion to disarm and build infrastructure for its northern neighbor. South Korea is even ready to introduce a tax for its citizens to unite the two countries. The South Koreans, who still suffer from the consequences of the global financial crisis, are not thrilled about the idea to sacrifice their meager savings for that. Moreover, China, which has a major influence on Pyongyang, is not ready to share its economic and geopolitical situation on the peninsula with the decaying U.S. economy.

Does Kim Jong Un want to make friends with the West on its terms, or does he try to follow the Chinese example and liberalize the Communist regime? Time will show. One should bear in mind the fact that a lot will depend on the US elections. If Barack Obama retains his title of the president, it will be possible to shake the sluggish situation with the unification of the Korean Peninsula. If Republican Mitt Romney wins, he will most likely be lobbying the "Vietnamese" scenario - the merger of the two Koreas through bloody intervention.