The world's largest sailing ship, the Sedov, that started its world cruise in May, may not reach all of its destination ports. The Sedov has recently declined entering the Swedish ports of Göteborg and Malmo because the local authorities could arrest the ship. US officials said that they would arrest the ship if it called at the port of San Francisco. 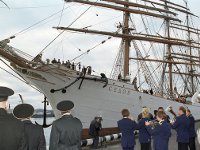 The ship was supposed to call at San Francisco in November to stay there for four days. The US authorities did not guarantee that the vessel would not be arrested. US officials politely warned the administration of the Russian Fishing Agency and the command of the Sedov about the possible arrest of the vessel because of the trial in connection with the so-called Schneerson library.

To cut the story short, the ship can be arrested to force Russia to return Rabbi Schneerson's library to the US-based Jewish religious organization Chabad Lubavitch. The library is a collection of 12,000 ancient Hebrew books, 50,000 documents and 381 manuscripts, which Russia currently keeps in its State Library.

The court ruled in August of 2010 that Russia must deliver the books to the US side. In July of 2011, the Federal Court of District Columbia allowed the Jewish religious organization to start the delivery of the books from the Russian Federation. Russia considers the rulings of US courts lawless and does not intend to bid farewell to the books. Why would Russia deliver the historical treasure, taking into consideration the fact that Russia has not either withdrawn or stolen it.

The US side has not returned timely comments. It was only said that the US Secretary of State Hillary Clinton was too busy on her visit to St. Petersburg. The Russian Fishery Agency is looking for an opportunity to arrange a meeting with the US Ambassador in Russia.

What kind of a library is it and why is there so much fuss about it?

Rabbi Joseph Yitzchak Schneerson lived in the early XX century in Lubavitch, the Mogilev province of the then territory of the Russian Empire. He inherited a huge library of Hebrew texts. Then came the revolution, which brought devastation, and the rabbi, wishing to preserve his valuable assets, handed them over for safekeeping to the Russian library. He had to travel all around the world afterwards, but all of the manuscripts were kept in Moscow.

In the early 1990's, the son and spiritual heir to the long-deceased rabbi Menachem Schneerson asked to return the collection, because the books and manuscripts used to be the personal property of Joseph Yitzchak Schneerson prior to the nationalization.

The case was heard in the State Arbitration of the RSFSR. On October 8, 1991, the instance ordered the State Library of the USSR named after Lenin to return the collection.

However, the Library of the RSFSR State Arbitration did not obey the decision having said that its archives were the property of the whole nation.

In early August 2010, a trial on the case of the Schneerson library was held in the United States. The case was settled in favor of Chabad as the "library allegedly became the property of Russia discriminatory, not for public use and without fair compensation." However, the Russian Foreign Ministry did not recognize the decision, but also demanded seven books from the Chabad movement.

Currently, the unresolved issue of the Schneerson library creates many obstacles for the cultural exchange in Russia and the United States, and several other countries. Thus, the Pushkin Museum and the Hermitage refused to provide the Gauguin paintings for the largest exhibition of the artist in the National Gallery in Washington over the fear that the paintings could be arrested. It is hard to say how the story is going to end. One thing is clear: Russia is unlikely to abide by the decision of the US court, and the Americans will keep on trying to get what they want. The Sedov was unlucky to get into the middle of the intrigue.

This is not the first threat of arrest that the ship received during this sailing tour. In late May, two ports - Göteborg and Malmö - had to be excluded from the route of the voyage. The Swedish authorities did not allow the ship to the port of Göteborg due to a local court decision that was made in favor of German businessman Frank Sedelmaier, who is known for his lawsuits against Russia.

Sedelmaier seeks compensation for the "lost investment" as a result of the attempts to organize business in St. Petersburg during 1990s. The lawsuit allowed the arrest and the forced sale of property in Sweden, Russia. The Russian Foreign Ministry recommended the crew should not come into the port to avoid trouble. It was previously planned that 17 foreign trainees of the Sedov were supposed to disembark from the ship in the Swedish ports.

The Sedov has already had the experience of being a captive of a foreign country. In 2000, the whole world learned of the story of the Swiss firm Noga, which allegedly owed Russia $63 million. The Sedov was arrested in Brest, France; the accounts of Russian official representatives in France were frozen. Fortunately, thanks to the work of lawyers, the arrest of the vessel was lifted, and Noga had to pay moral and material damages in the amount of 500,000 francs.

Now briefly about the voyage of the Sedov. The world's largest active sailing ship is 118 meters long. It was built in Kiel, Germany, 91 years ago. The ship is owned by the Murmansk State Technical University. Today's voyage around the world is devoted to the 1,150th anniversary of the birth of Russian statehood. The sailing ship will carry the Russian flag on the waves of five oceans to overcome around 45,000 miles in 14 months.