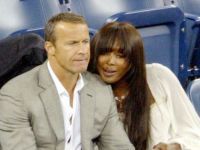 Today, the 22nd of May, is Naomi's 42nd birthday, hardly credible, but true. She looks fresh and youthful, never aging.  Born on the 22nd of May 1970, of Jamaican origin, with African and Chinese ancestry, Naomi has been a successful model since the age of 16.

She moved to Moscow in 2008 to live with her Russian life partner, Vladislav Doronin, a handsome real estate entrepreneur and billionaire. Life in Russia is working miracles for Naomi:  no more temper tantrums, no more bad press. Of course we know that since the times of the Saints Boris and Gleb, Russia has been holy earth, blessing all those living on it.

In the new campaign of PINKO fashion for spring-summer 2012, the international super model shows her slim body and exotic face once more. Anything would look gorgeous on her, but designers' clothes look simply fantastic when Naomi wears them.

Her looks have inspired the fashion industry worldwide for several decades. Top fashion magazines like Elle, Glamour, Harper's Bazaar and Vogue feature her regularly. In 2009, Glamour Magazine Russia named her "Woman of the Year."

Naomi Campbell is a diva of timeless beauty. "It is always surprising to get asked to do a job I did 20 years ago," she joked when her friend of olden times, Italian star designer Roberto Cavalli, asked her once more if she would model for him. She is Cavalli's fashion goddess. "Naomi is a black Venus, she is simply perfect", the designer says.

Naomi Campbell has been very poised and in complete control of herself since she moved to Russia. Residing in Moscow has changed her life completely, and much to the better. She is the darling of Moscow's fashionable high society and a regular guest on Russian TV talk shows.

Her photos often appear on the covers of the Russian edition of Vogue. In one of its special features, Naomi posed on Moscow's rooftops, wearing luxuriant black outfits. The series was named "Naomi: Stranger in Moscow". The photographer was Karl Lagerfeld.

Naomi Campbell also appeared in a commercial for Vladislav Doronin's luxury apartment building, called "Legend of Tsvetnoy."  She was shown swimming in the pool and working out in the gym. At the end Naomi said, "I listen to your heart, Moscow. Now you know where I stay."

Vladislav Doronin is an elegant and quiet man, supportive of Naomi, giving her plenty of good advice. "I love him very much," she answered when asked about their relationship in an interview. Naomi met Vladislav at the Cannes Film Festival in 2008, and has been living with him since then. They are inseparable, always traveling together.

Naomi loves Russia, especially Moscow. Her favorite restaurant is Café Pushkin, a sumptuous 24-hour establishment in a Baroque mansion on Verskoy Boulevard. It is beautifully decorated, filled with antique furniture and art.

In 2010, Naomi Campbell joined Vladimir Putin's United Russia Party. The Moscow Times wrote, "She is a young, sexy, intelligent woman who has shown that new Russia can attract the best in the world. Once she modernized the fashion world, now she is part of the modernization of Russia."

In February 2011, Naomi Campbell interviewed Vladimir Putin about his fitness routine and judo achievements for GQ magazine. They had previously met at the world's first Tiger Preservation Summit in Saint Petersburg.

In November 2011, Naomi Campbell was appointed editor-in-chief of the German and Russian editions of Interview magazine. Executive Chairman Bernd Runge said, "Naomi is one of the rare personalities who is recognized throughout the world for her tremendous contributions to the fashion and creative world, as well as her philanthropic contributions through Fashion for Relief."

This is another facet of Naomi's character, her big heart for underprivileged human beings. Maybe they remind her of her own humble origins?

May her light continue to shine brightly! Congratulations to Naomi Campbell on her birthday and best wishes for many happy returns.