Awards for criminals how special 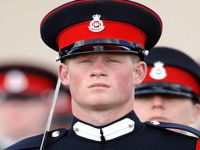 "You fasten the triggers for others to fire,

Then you sit back and watch,

When the death count gets higher.

You hide in your mansion

Flows out of their bodies

Humanitarian Awards are surely taking on a whole new meaning. The end of April brought the obscenity of the announcement that Madeleine Albright, a woman prepared to sacrifice children by proxy (i) was to be awarded America's highest honour, the Presidential Medal of Freedom, for her role as a long time champion of democracy and human rights all over the world.

In the same twenty four hours, an announcement was made that Britain's Prince Harry is to receive a special award for his "humanitarian work."

The "Distinguished Humanitarian Leadership" award: "recognizes outstanding achievement" and is presented annually by the Atlantic Council. Prince Harry and his brother, Prince William, have been jointly nominated, with Prince Harry traveling to Washington to accept on behalf of both, on the 7th of May.

Madeleine Albright's latest honour for her services to humanity has been awarded to others who compete admirably with her dedication. They include such peerless war mongers as Henry Kissinger, Donald Rumsfeld, General Colin Powell, whose pack of lies to the United Nations (February 2003) initiated Iraq's destruction - and former UK Prime Minister, Tony Blair, whose offices and officers provided those lies.

That human dove of peace, Dick Cheney has been a recipient, as has his Israeli counterpart, Shimon Perez and General Norman "No one left to kill" Schartzkopf, to name a few.

Fellow recipient of the Award with Albright is Bob Dylan. Funny world..

Prince William and Harry are both in the armed forces (between social engagements). In a career move that has been dubbed by many "a cynical PR stunt," William flies Naval Rescue helicopters. Seemingly it no longer looks good for a future king to kill people. Harry clearly faces no such trying constraints.

Deployed to Helmand Province, Afghanistan, in 2007, he reportedly lurked safely, deep in a bunker, out of harms way, surrounded by a phalanx of armed Royal Protection Officers (ii) whilst playing at being a Forward Air Controller, who remotely (in all senses of the word) guides in aircraft to attack the locals.

There is not alone an irony, but a terrible deviance, about a supremely privileged young man, whose entire upbringing has been in palaces, castles and the most elite of schools, calling in aircraft to destroy peasant farmers, in remote, poverty stricken villages - along with their subsistence livilihood and simple adobe homes.

There is a further irony in that his "child within" knows loss. At thirteen he walked behind his mother, Princess Diana's coffin, as it was transported for her funeral, after her death in Paris in an appalling car crash, with her Muslim lover - some say fiancée - Dodi al Fayad.

Freud might have had something to say of his display of crusading contempt for the people of Afghanistan - 99% Muslim population - just before he was hurriedly whisked out of the country for his safety in January 2008, once the media had exposed that he was there. His attitude, "day job" and his fleeing, are beneath contempt. If Albright sacrificed children by proxy, the Prince, arguably, killed them by proxy.

Back home he and his brother have their own households, with flunkies to provide, and an aristocratic titled adviser to oversee the all and their lives.

Now his delayed return to Afghanistan, to hone his killing skills, is seeming more imminent. He will be more hands-on, having been awarded his Apache Flying Badge, so he can return and dissect living beings from an air born, mass human shredder of obscene and terrifying destructive power.

That the two Princes have established a charity to aid needy children in Africa, whilst Harry has been involved in orphaning, maiming and ending fledgling lives in Afghanistan, and now returning, is surely a near schizophrenic perversity.

The Atlantic Council presentation for the pair's humanitarian endeavors, however, is "for efforts in championing" other soldiers involved in invading and killing in two decimated lands which posed no threat to anyone, yet alone far away Britain and America.

Prince Harry, "is being recognized (with The Distinguished Humanitarian Leadership trinket) for support to charities like Walking With The Wounded, ABF The Soldiers' Charity and Help For Heroes." All of which are funded with the sort of moneys which would help the maimed, destitute and traumatized in the countries the charities' beneficiaries have helped destroy, back to normality for many years. (eg: iii)

A St James's Palace spokesperson commented, "Prince Harry will use the award to pay tribute to British and American veterans' charities for their achievements in helping to rehabilitate wounded servicemen and women, and to reintegrate those who have served in the armed forces into civilian life."

No such helping  and rehabilitation for their Afghan or Iraqi victims.

The Prince, however, is in good company. Previous presentations of the awards have included Madeleine Albright's philandering, Iraq strangulating boss, William Jefferson Clinton; President George W. "Crusader" Bush, wanted by many for Crimes Against the Peace; Tony Blair; Henry Kissinger of course - and General Colin Powell (2005, just two years after his serial misleading of the UN).

Blair's acceptance speech air-brushed out "Shock and Awe," destitute Iraqis and Afghans and blathered on about: "commitment to freedom ... economically, politically, culturally ..."

Sponsors of this peaceful  and freedom loving establishment run in to several pages (iv), but include the US Departments of the Air Force, Navy, Defence and Energy, and Los Alamos National Laboratory, which brought the world the atomic bombs, dropped on Hiroshima and Nagasaki in 1945. In the October of that year, the Laboratory received the "Army-Navy 'E" Award" for "excellence in production."(v)

Another sponsor is the Lawrence Livermore Laboratory whose development aimed originally to "spur innovation and provide competition to nuclear weapons design at Los Alamos." It also brought the world the Polaris nuclear armed submarine.

NATO and Lockheed Martin are on the roll of honour, as are Raytheon and SAIC ($2.6 billion in trade with the Department of Defence in 2003, year of the invasion of Iraq).  SAIC's management team includes Bill Clinton, a clutch of former US Defence Secretaries and former UN Iraq Weapons Inspector David Kay, who continued his fruitless hunt for Iraq's non-existent weapons of mass destruction after the Iraq invasion, when the US-UK coalition was using this as their casus belli.

General Dynamics is at the table, so to speak, as is Boeing and Dow Chemical, which swallowed up Union Carbide, which brought the world the 1984 Bhopal disaster. Exact casualty numbers have never been established relating to Bhopal, but upper figures are fifteen thousand dead and over half a million medically affected, still ongoing. (vi)

The Atlantic Council lists its " Important contributions" as including:

"The process of NATO transformation and enlargement" and "drafting roadmaps for U.S. policy towards the Balkans, Africa, Cuba, Iraq, Iran and Libya."

No "E" for Excellence Award for the Balkans and Iraq, watch out Africa and Cuba. UN Secretary General, Ban Ki-Moon, under whose watch and UNSCR 1973,  Libya was largely destroyed by NATO's "humanitarian intervention" is a fellow recipient of this year's  Distinguished  Humanitarian Leadership Awards.

It can only be hoped this joyous occasion is not sullied by the Prince's lack of respect for cultural diversities and that he is sparing with the liquid refreshment. Hopefully he will also dress suitably.

One episode, when he dressed in a Nazi uniform, complete with Swastika arm band, caused royal photographer, Arthur Edwards, to write, "Where were his father and the highly paid courtiers who advise this young man? Who let him drive out of (Highgrove House, his father, Prince Charles' Residence) dressed this way? Smoking cannabis, late-night drinking and brawling with paparazzi could be explained away as the errors of youth. But Harry, what must you have been thinking when you put on that armband?" (vii)

This was shortly before his Uncle, Prince Edward, was to attend the commemorations of the liberation of Auschwitz, representing the Queen.

Incidentally, Prince Harry's Award is to be presented by Colin Powell and Ban Ki-Moon's by Henry Kissinger.

In all, mind stretching stuff. Oh to be a fly on the wall.