Russian children born abroad to be protected from foreign care

Russian women who gave birth in marriages with foreigners outside of Russia no longer have to obtain the consent of their spouses to formalize Russian citizenship for their children. The President introduced amendments to the citizenship law to the Duma that override any discriminatory rules. This should help to protect children from overzealous foreign care.

Pravda.Ru wrote in detail about the fact that the Russian law on citizenship is inherently discriminatory in relation to children of mixed marriages. At our request, lawyers studied similar legislation in other countries and came to the unequivocal conclusion that nowhere in Europe and the USA, Australia and Canada there are rules that require a permission of foreign spouses. On the contrary, citizenship is granted to the children of mixed marriages automatically, or at the request of a parent. Sometimes dual citizenship is granted when a grandparent is a citizen of a country (in Italy, for example).

Only Russia, until recently, seemed to be doing everything possible to complicate the acquisition of citizenship by children born outside of the country. It would seem that the fact of authorization of the foreign spouse is more than enough. But there is more to it. It is essential that both parents are present at the consulate in person, which often involves long and expensive trips. They still have to pay a large consular fee - despite the fact that most countries do not charge any fees, since citizenship is the right of a citizen, and it would be more than strange to demand money for it. 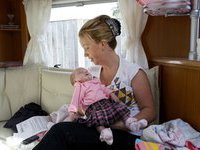 But it seems that this absurd situation has finally changed. President Dmitry Medvedev submitted to the State Duma a draft federal law "On Amendments to Article 14 of the Federal Law" On Citizenship of the Russian Federation." As stated in the explanatory note, "The purpose of the proposed amendment bill is to create a simplified procedure for obtaining Russian citizenship by a child living abroad one of whose parents is a Russian citizen."

It also explains that "the lack of Russian citizenship by a child leads to inability to protect their interests on the part of Russia (including through the provision of diplomatic and consular assistance), and also makes it difficult to implement at least the minimum amount of parental rights guaranteed by the laws of the Russian Federation."

It turns out that a foreign parent is in a better position with regards to the implementation of their rights, because they can always count on the help of the state. This, in turn, violates the Russian Family Code, which provides for equal rights for both parents - both in family and in social relations.

The explanatory note also emphasizes that the amendment to the Russian law does not contradict international legal norms, in particular the UN Convention on the Rights of the Child. It provides that the State - Party to the Convention gives the child a nationality in accordance with its laws. The Convention does not provide any mention of parental permissions.

The amendments to the citizenship law were introduced due to the persistent demands of the citizens of the Russian Federation, including those living abroad. The explanatory note to the bill states that there has been a number of well-known conflicts where the decisive factor was whether or not the child had Russian citizenship.

"Pravda.Ru" repeatedly wrote about these conflicts. Today, 66 Russian families whose children have been taken away by local guardianship became the hostages of other countries. These are only the parents who dare to talk about their tragedy. Indeed, often the mothers who address Russian media are victims of the most stringent measures - for example, they are not allowed to see the children that have been taken away from them.

Maya Kasayeva who also wrote to "Pravda.Ru," for a telephone conversation with Russian journalists, was banned from all (!) contacts with her son who was taken away from her a few years ago by the Norwegian custody. The court ruling issued the other day to another Russian woman - Irina Bergset - says that the volume of visits to Norway by the Russian mother is inversely proportional to her political and journalistic activity.

The document states that the number of visits by the Russian mother with her Norwegian son depends on the mother's activity level and time of visits may be extended by the court only if the mother reduces her level of "activity" in the Russian media. That means that the mother should shut up and not disclose the terrible details of the foreign guardianship. But the activity, not just by the parents, but especially the state, aimed to protect its citizens can lead to real results.

A few days ago great news came from Norway: the local guardianship returned children to the Indian couple. The kids were taken away because they did not have a separate room for games, and while nursing the baby the mother was not pressing it to her breast, and changed his diaper on the bed, and not on the changing table. For all of these "crimes" of the Indians who came to Norway for two-year contract working with the oil company, their children were taken away, allowing the parents only two visits per year.

It took the intervention of their home country that resulted in the present diplomatic row between India and Norway. Personally the President of India and Minister of Foreign Affairs of the country have interfered. The largest Norwegian telecommunications company Telenor was taken away its license to work in India. After a year of diplomatic war children were returned to their homeland. The conclusion is clear: Russian kids, too, can be returned, but only if Russia fights for every citizen, especially the small and defenseless ones. The amendments to the law on Russian citizenship are the first step in this direction.