Study showed that people who tend to think analytically are less likely to report they believe in God... 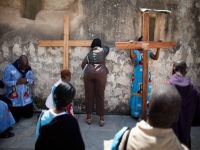 The kind of thinking influences how much people tend to have religious beliefs. This is the conclusion of a study published Thursday in the journal, Science.

Will Gervais and Ara Norenzayan, University of British Columbia, Canada, found that people who think analytically, rather than intuitively, tend to be less likely to report they believe in God.

"As a psychologist, I tried to understand the factors that led people to have faith. In this process, we must also take into account that there are probably more than half a billion people worldwide who do not have any kind of religious belief. That is: we try to understand why some people have religious beliefs and not others," said Gervais in a podcast available from Science.

In a series of experiments, they showed that by inducing, even if subtly, analytical thinking, people tend to lower their religious beliefs when tested on the subject after the experiment. In one, the researchers showed, for example, the figure of the sculpture "The Thinker" by Auguste Rodin, in which a person appears in a state of reflection.  In another, a crossword puzzle with words like "think," "consider" and "rational."

The result was that people who were induced to think analytically from these "cues" reported a decline in religious belief compared to those that did not receive them.

The influence of analytical thinking is not solely responsible for religious unbelief, the researchers said. "I want to emphasize that although it appears that analytical thinking is a source of religious unbelief, we are not saying it's the only one. There are also other cultural factors within a certain context thar can be a source of religious disbelief, as well  as other cognitive factors," said Gervais.

This lack of religious belief can emerge also with "specific deficits in the intuitive process that leads to the representation of religious concepts ... of secular cultural contexts which lack the concept that a person should adopt a specific religious belief, and of societies that effectively ensure the existential the safety of its citizens," the authors write in the article.