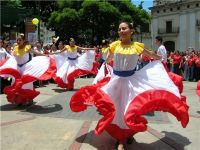 Music represents energy, hope, joy of life, integration and peace. Music is a gift from heaven, philosophers say, while musicians will readily agree.

Venezuela has always been a musical country where people love to sing and play instruments, participating in bands, combos, small or big orchestras.

Numerous are the videos showing President Hugo Chávez singing. He sings in between speeches, he sings when greeting Venezuelan compatriots or foreign diplomats.  He even sings when visiting a university in Moscow.

The State Foundation for the National System of Youth  and Children's Orchestras of Venezuela is a non-profit organization watching over the nation's more than 120 youth orchestras and instrumental training programs.

About 100,000 children are able to attend the system's music schools around the country, either cost-free or for a small nominal fee. This is especially helpful for all those youngsters who come from poor socio-economic backgrounds.

The founder, José Antonio Abreu, a Venezuelan economist and musician, says that "music is an agent of social development in the highest sense because it transmits the highest values - harmony, solidarity and mutual compassion. It has the ability of uniting an entire community in the expression of sublime feelings."

The Government of Hugo Chávez sees the socialist values of "El Sistema," and is funding 90 percent of the administration costs, as well as supporting the system's special programs financially.

"El Sistema" is known for rescuing young people in impoverished circumstances from the environment of "gangsta" crimes and possible drug abuse, into which they would otherwise be drawn. The goal is to use music for the protection of childhood through training, rehabilitation and prevention of criminal behavior.

Probably the best-known product of "El Sistema" is Venezuela's prestigious Simón Bolívar Orchestra (formerly: Simón Bolívar Youth Orchestra), but the word "youth" was dropped from the title, as the musicians have matured and are professional adult musicians now. Under the baton of Gustavo Dudamel, they are touring worldwide, with guest appearances in concert halls on all five continents.

Gustavo Adolfo Dudamel Ramírez, born in Barquisimieto on the 26th of January 1981, is Venezuela's most prominent conductor and violinist. The son of a trombonist and a voice teacher, he studied music from an early age, taught by "El Sistema,"  He took up the violin at the age of ten, and soon began to study composition. In 1995, he started to study conducting and was appointed music director in 1999.

"El Sistema" is very popular with Venezuelan children and their parents. When the youngsters enroll, parents are involved too. They must watch over their offspring's regular attendance.

"El Sistema" helps to keep the children off the streets. They receive a clean shirt and free lunch. Furthermore, they are introduced into the world of music with its miraculous empowerment.

By the time they graduate from school, they will be well-trained singers, instrumentalists and conductors.  Eighty-five percent of all "El Sistema" students reach a good or even excellent level of music proficiency.

"El Sistema" offers more than just music. It also teaches the spirit of camaraderie and helping each other. It teaches life skills like learning how to listen. The musicians are focused on the music, on the teacher or conductor, but above all, they are focused on listening to each other.

"El Sistema" is a self-feeding system where students eventually will become teachers. Thus the system has been perpetuating itself for almost 40 years.

In March 2012, the Venezuelan Government handed out another 600 musical instruments to children at ten schools in Caracas. The initiative was organized by the National Anti-Drug Office (ONA) and the Ministry of Justice as part of a strategy to prevent crime.

The instruments that were handed out are the traditional folk music instruments: bandola (Venezuelan mandolin), cuatro (Venezuelan four-string guitar) and maracas, percussion instruments made of dried calabash shells, filled with dried beans.

The government of President Chávez wants to encourage young people to play traditional Venezuelan folklore, the type of music which Hugo Chávez loves himself. Coming from the state of Barinas in the Llanos (grasslands), he is a big fan of "Musica Llanera," the gaucho music of the grassland herders, singing and playing the Joropo.

The Venezuelan Joropo is a musical style resembling the waltz. In 1882, El Joropo became the country's national dance. Actually, the word means "having a party". The Joropo is a festive dance. Grassland communities gather for Joropo festivals where they meet, talk, eat, drink, dance, sing and generally have a good time.

The Joropo is a dance for the young and the old. Toddlers begin dancing the Joropo as soon as they can stand upright on their little wobbly legs. Granpa will dance the Joropo with granma as long as his legs will hold out, the sharp, rhythmic beat and the artistic footwork of quick, strong taps on the ground.

Joropo festivals are also considered to be matrimonial markets, where the boys eye the girls and vice versa, where future partners are chosen and invited for a first dance.

The ladies' costumes are colorful and flashy, swirling knee-length skirts with layers of frills in all the colors of the rainbow. The men wear the traditional white linen suit with a large-brimmed stiff black or white hat.

The Joropo is danced in couples who form long lines. The dance uses the hand turn, waltz turn and lots of fancy foot action. Venezuela has regular Joropo tournaments with prizes for the winners.

The Venezuelan government's socialist project "Alma Llanera" (Soul of the Grasslands) will incorporate over 40,000 children in orchestras of traditional folklore music.  For the new project, 395 million Bolivares have been approved. The money will be given in support of 275 folklore youth orchestras all over the country.

Llanero culture is an important part of Venezuela. There are 12 million cattle in the Llanos. The Llaneros have to drive the animals over great distances. During the wet season in the winter, the herders will drive them to higher ground because the plains are often flooded. In summer, the herders must drive the cattle back to the wet areas where they will find enough water to drink during the hot, dry season.

Over the centuries, the Llaneros of Venezuela have developed a distinctive lifestyle with their own cuisine, music and dance. The yearly Llaneros rodeos and Joropo festivals are highlights for locals and tourists alike.