Cuba will aid children of Fukushima

Japanese pacifists seek Cuban attention for the children of Fukushima 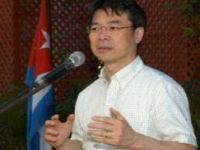 The director general of the Japanese organization, Peace Boat (Cruise for Peace), Tatsuya Yoshioka, expressed the interest of his group for Cuba to cooperate in the care of children affected by the nuclear accident at Fukushima.

"It would be a fantastic idea and is what we want," Tatsuya said when asked by journalists about the possible help of Havana in the treatment of patients after the nuclear leakage caused by the earthquake and tsunami in March last year.

As a non-governmental organization, that would support negotiation between the governments of Japan and Cuba, the project leader who arrived on Thursday to the port of Havana for the fifteenth time since 1990 was recognized.

The proposal came from the Global Forum on Hibakushas (survivors of the atomic attacks on Hiroshima and Nagasaki) for a world free of nuclear weapons, organized by members of Cruise, who met here with the leader of the Cuban Revolution, Fidel Castro.

During the meeting this afternoon, Fidel Castro proposed the publication of a book with the testimonies of survivors of the bombing with nuclear weapons in both Japanese cities in August 1945.

"We accept the initiative of the book and the proposed closer cooperation with Cuba, especially in medical education, to give attention to Fukushima's children as it has done with Chernobyl" (the accident in the Ukraine in 1986), Tatsuya revealed.

Referring to the Forum, the leader and founder of the Japanese project created in 1983 highlighted the concern of Fidel Castro regarding nuclear dangers.

They also opposed U.S. hostility against the Caribbean nation while thinking that this policy does not create the conditions for peace.

We decided to go back even if we have the blockade, the director explained in reference to the U.S. ban on vessels that touch Cuban port that go to the United States.