What should be the reaction of people when a store opens in a walking distance? You would be wrong to assume that this will make them happy, especially when the activists stage protests, thus providing advertising for the extremists and hucksters. 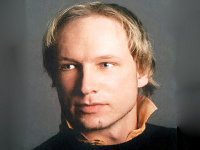 Brevik store opened in the city of Chemnitz, Germany. The store sells Thor Steinar clothing popular with East German skinheads and neo-Nazis. The Germans believe that a variety of textiles of this brand is the password for local skinheads and right-wing radicals. For this reason, a store named Brevik was closed in Hamburg in 2008. Then stores in Magdeburg and Leipzig were shut down. At the time the emphasis was placed primarily on the anti-fascist propaganda. Today accents are placed somewhat differently.

The name of the store reminded some concerned burghers the name of the Norwegian terrorist and murderer Anders Behring Breivik. Since the opening of the store the left radicals have been periodically staining the sign with permanent paint and holding protest pickets next to the entrance.

On July 22, 2011 a citizen of Norway Breivik shot 77 people. His name is somewhat similar to that of a provincial Norwegian town located 160 kilometers from Oslo with the population of 2,700 people. A spokesman for the Katja Uhlemann stated that the existence of a store with such a name is "absolutely unacceptable".

"We have already contacted the tenants and will take further steps to have this store shut down as soon as possible," website 20 minuten quoted Uleman.

The fact that the scandal with the branch of Brevik took place in Saxony is not pure coincidence. "For many years, Chemnitz has been playing an important role in the marketing of ultra-right music and designer clothes," said the deputy of the Landtag of the SPD Hanka Kliese who is coordinating the project directed against the trade network Thor Steinar. "The opening of the store gives us Democrats a reason for concern."

The commercial chain Thor Steinar got under the attack almost immediately after its creation in 1999. A lawsuit forced the company to change the logo, made up of runes Tir and Sig, which looked like the SS symbols of the Third Reich to anti-fascists. At one time there were rumors that the German company Mediatex GmbH that owns Thor Steinar sold part of the shares to Dubai. According to the excerpt from the commercial register, 30-year-old Mohammed Aweidah was appointed commercial director of the company. In this regard, neo-Nazis discussed the possibility of boycotting the products of this company.

In 2008 a corporate store of Thor Steinar opened in Moscow. On the night of January 1, 2009 a group of anti-fascists and anarchists set the store on fire. The store has suffered significant damage.

This way it will soon be impossible to give names to anything. Imagine that someone will associate the first part of the name of the international retail chain Marks & Spencer with the name of the author of the "Communist Manifesto."

There is no assurance that such measures are effective enough to counter right-wing extremism, but they may be beneficial by providing free advertising.