American tourists worst in the world

Americans are the worst tourists in the world. They think so themselves, a study conducted by marketing company Mandala Research showed. 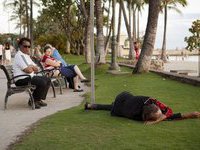 During the study, 5,600 people from five countries were asked to describe their attitudes towards tourists from different countries, the Rossiiskaya Gazeta newspaper wrote. It turned out that every fifth respondent said that  U.S. citizens were "the worst tourists." Interestingly, the majority of those who said so were American citizens themselves.

Russian tourists closed the top five of the worst tourists in the world. Travelers from China took the second place in the ranking of the worst tourists in the world. The third place belongs to tourists from France, whilst the fourth was "awarded" to Japanese tourists. The top ten included citizens of Korea, India, Germany, Spain and the UK. The "black list" ended with tourists from Ireland, Switzerland and Australia.

As for the incidents, which happen to American tourists in their journeys, most respondents lost luggage (22 percent) and extreme weather (21 percent). Nearly 19 percent of travelers admitted that they happened to get lost, pay extra (16 percent), come late for a flight (16 percent), get injured, fall ill or ask for emergency help from medical specialists (11 percent).

Eight percent of respondents also said that they experienced trouble during their holidays when they ran out of money, or they could not get access to it. Seven percent complained that they had a headache and could not remember what happened to them after a wild party the night before.

The same number (7 percent) admitted that they could not find a bathroom when they needed it urgently. Five percent of respondents mentioned theft or robbery; the same amount were bitten by bed bugs, or faced large-scale strikes or mass riots during their stay in foreign countries. Nearly 5 percent reported the loss of passports. Three percent fell victims of fraud. The same amount of people said that they were detained by police or had problems with law-enforcement agencies.