Presidential elections are held in different parts of the world every month. All sorts of incidents may occur during this, perhaps, the most important kind of elections. They may turn into a tragedy sometimes, or may look like comedy and farce in other cases. Eye-opening things may happen not only in Africa or on remote islands of Oceania. They may take place on the territory of the former Soviet Union, Europe and the USA. 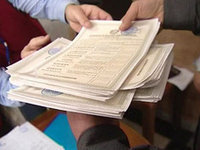 Moldova is the indisputable leader when it comes to strange and bizarre presidential votes. This former Soviet republic has been living without the officially recognized head of state for nearly 1,000 days already. The trouble is that the local law does not stipulate the general election of the president. The Moldovan president is elected by the majority (three-fifth) of MPs. The political crisis in the country is based on the fact that one of the presidential candidates has to receive 61 out of 101 votes of the deputies.

The soap opera began in April 2009. The country held the parliamentary elections, in which the ruling Communist Party apparently gained 61 votes. As a result, then-President Vladimir Voronin was supposed to be replaced. However, pro-Romanian demonstrators staged massive riots, and the Communists gained only 60 seats. Three attempts to elect Communist leader Zinaida Grechanaya as president failed. The parliament had to be dissolved, new elections had to be appointed.

On September 11, 2009 Voronin's term in the office ended, and he stepped down. The Communists had moved into opposition by that time. The coalition of the pro-Romanian and pro-Western forces had taken control of the parliament. Parliament speaker Mihai (Michael) Ghimpu became the acting president of Moldova. Marian Lupu was the only candidate for the post of the president. However, the pro-Western coalition had only 53 parliamentary seats. Two attempts to elect him failed. A judgment worthy of Solomon came after five fruitless attempts to elect the president. It was decided to let the people to make their choice. September 2010 saw the referendum about constitutional amendments stipulating the direct election of the president. However, again there was a confusion. Less than a third of voters took part in the vote, and the referendum was declared void. The political circus continued.

In November 2010, Moldova elected its parliament for the third time in 18 months. A year later, the deputies were "mature" enough to elect a new president. Lupu, who served as the parliament speaker, became the candidate for the post. However, the votes of the ruling pro-Western and pro-Romanian alliance were not enough again - 59 instead of 61. The political crisis in this ex-Soviet republic continues, and it seems that it is not going to end ever.

Can direct presidential elections be capable of curing the political "disease?" Not always. Take an example of another former Soviet republic - Lithuania. The story took place in 2003-2004. On January 5, 2003, the Lithuanians decided to put one of the best pilots of the Soviet Union, Rolandas Paksas, on the position of the president. They did not turn their heads to Valdas Adamkus, who spent most of his life living in the USA. Paksas took office in late February, but did not stay in the position for a year.

In October 2003, the Department of State Security of Lithuania submitted the documents to the parliament which supposedly proved Paksas's connection with organized criminal groups. The "groups" stood for Russian businessman Yuri Borisov, who was a co-sponsor of Paksas's election campaign. Anti-Russian forces showed up immediately. As a result, the parliamentary commission concluded that the president was allegedly staying under the "influenced from a number of persons" which endangered the national security of the country.

As a result, in February 2004, the parliament launched impeachment proceedings. The Constitutional Court quickly "discovered" that Paksas illegally gave Borisov Lithuanian citizenship. On April 6, 2004 Paksas was impeached. U.S. puppet Adamkus won the hastily organized elections. Lithuanian law-enforcement agencies filed a criminal case against the impeached president. The Vilnius District Court did not find any elements of crime in Paksas's actions, though. To put it in a nutshell, the authorities of Lithuania - a EU and NATO member - did not pay any attention to the choice of the people.

Still, the direct election of the president is better than a parliament vote. The Czech Republic and Slovakia realized that, albeit only in 12 years. They also had a chance to repeat the record of national powerlessness, although they were wise enough to avoid such a perspective. The authorities of Slovakia and the Czech Republic did not put up the issue of the presidential election for a referendum. This gave the two small European states an opportunity to save a lot of money and nerves. However, the political crisis still occurred.

The Slovaks were the first to go that way. Michal Kovac's powers ended in early 1998. None of the candidates could obtain the support of the three-fifths of the deputies. Without further ado, Slovak lawmakers amended the constitution and announced direct presidential elections. As a result, on May 29, former mayor of Kosice, the second-largest city in the country, Rudolf Schuster, defeated Vladimir Meciar, a long-standing prime minister. Since then, the Slovaks elect their president directly.

The Czech Republic arrived to the idea of ​​direct presidential elections only in February this year. The Czechs could not forget the story of 2003, when Vaclav Havel's second presidential term ended. There was no obvious favorite around. The country had been living without the head of state for more than a month. Former Prime Minister Vaclav Klaus took the position of the president only at the third attempt. He will have to step down in a year. The Czechs decided to brave direct elections not to tempt fate.

The citizens of Austria elected their president in 1986 contrary to the will of foreign governments. Former UN Secretary General Kurt Waldheim was a candidate from the Conservative People's Party. Unpleasant facts of his biography surfaced two months before the elections. The documents showed that he participated in the executions of Yugoslav partisans when he served as a Wehrmacht officer during the Second World War. Waldheim was also involved in the deportation of Jews from Yugoslavia and Greece to Nazi death camps.

The United States, Israel and almost all countries of Western Europe turned against the Austrian candidate. Yugoslavia wanted to interrogate him. However, the external pressure gave the opposite effect: 54 percent of Austrians voted for Waldheim. The politician received such impressive support even though he had been denied entry to the United States and most European countries. The main powers in Austria are concentrated in the hands of the Chancellor, so the country did not turn into a rogue state. The Austrians set an example of defiance to external pressure. They will show their independent character again and again in the future.

The most outstanding story in modern history, when the presidential election turned into farce, took place 12 years ago in the U.S. Many still remember the hysterical recounting of votes in Florida. George W. Bush and Al Gore would take the lead in turn for weeks. "The triumph of democracy" was about the following. If it had been the direct election, Gore would have won. However, there is no direct election in the "stronghold of democracy."

The goal of U.S. presidential candidates is to gain the support of the majority of electors, rather than voters. It can be different in each of the 50 states. However, one elector in sparsely populated states of Montana, Alaska or New Hampshire represents a far smaller amount of voters than one elector from California, New York or Pennsylvania. Where is the equality of rights which the Americans are so proud of? As a result, a candidate who receives more votes, may lose.

Such confusing situations have occurred in U.S. history four times. The first three occurred in the 19th century. Nothing of the kind happened in the 20th century. And there came the Year 2000. Bush gained 47.9 percent of votes, while Gore - 48.4. The fate of the elections was decided in Florida, which was represented by 25 electors. The Supreme Court of the United States halted the endless recount of votes in 1.5 months after the election. If the votes had been divided proportionately, Bush, who won in Florida, would have received the total of 13, whilst Gore - 12. The latter would have become the president...The rest is history. All the votes went to Bush. He had 271 electors, while Gore, who gained more votes, had 266.

That's the way democracy goes. It's far from being perfect in the West, although are are too much preoccupied with teaching democracy to others.