Two schoolgirls committed suicide in the town of Lobnya, the Moscow region, two days ago. The girls leapt to their deaths from the top of the apartment building, RIA Novosti said. The dual suicide took place on Tuesday, at 9:30 p.m. 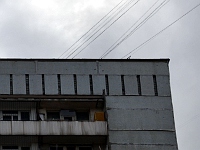 The two girls, named only as Nastya and Lisa, entered the roof of the apartment building through the loft. They were holding each other's hands, as they made the last steps in their lives. The girls were already dead when the ambulance arrived. An eyewitness of the tragedy, a local resident, said that one of the schoolgirls was alive for a while, Vesti.ru reports.

According to the eyewitness, he parked his car and was getting out of it, when he heard the sound of something falling to the ground. "I saw two girls lying on the snow. I cam up to them and tried to feel the pulse of one of them. She was alive for a while," the man said.

The psychological state of the teen girls and the reasons, which pushed them towards suicide, will be determined as a result of the psychological expertise based on the materials of the criminal case.

Some of the girl's friends supposed that the decision to commit suicide was initiated by one of the girls - Nastya. The other girl - Lisa - supposedly jumped to her death just for company. However, it was later said that the two girls would often express their suicidal thoughts on social networks.

One of the girl's friends said that Nastya was planning her suicide for almost a week. "She told me that she'd die. She also said that she knew how it would happen to her. She would very often complain that her mother and friends were not understanding her at all. I sometimes thought that she was alone in this world," the girl said.

Nastya's another friends told the agency that the girl was sick and tired of school. She had already tried to kill herself three times before. Nastya tried to slash her wrists twice. About two week before her death, she had taken a dangerous dose of strong pills. Psychologists said that the girl was trying to attract adults' attention to herself.

While police were investigating the deaths of the two teenage girls, another similar tragedy took place in Moscow. Alexander Filipyev, a young man of 14 years of age, jumped out of the window of his apartment on the 17th storey of the apartment building situated on Varshavskoye Shosse. The Teenager committed suicide after he had a fight with his father. The boy died on the scene.

Russia's Ombudsman for Children's Rights, Pavel Astakhov, stated Wednesday that the problem of teen suicide in Russia should be analyzed on the level of the state. Schools do not help children cope with their problems. Teachers do not pay much attention to students, whereas parents are usually busy with their professional careers.

According to Astakhov, there is a serious shortage of school psychologists in Russia. There are only 16,000 of them for 48,000 schools. In addition, Mr. Astakhov put forward a suggestion to set up special services which would work on the issue in an attempt to prevent teen suicides.

As many as 1,500 children committed suicide in Russia during the recent three years. The number of failed attempts to commit suicide was three times as larger.

Russia is ranked sixth on the number of suicides in general. The country follows Lithuania, Korea, Kazakhstan, Belarus and Japan. As for the level of suicides among underage individuals, Russia takes the worst place. It comes first in Europe and takes one of the top positions in the world, Pavel Astakhov said.