US and Chinese space garbage may soon fall on your head

Some day, people may see piece of space garbage falling down on their heads. The United States - the country that is known for its pragmatism and conservative views about practically everything - has joined the development of The Code of Space Honor. 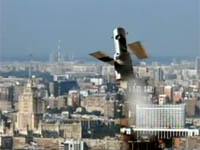 US Secretary of State Hillary Clinton has recently stated that America, like a real gentleman, would soon take an active part in the elaboration of the rules of conduct in space. The story started in 2007-2008, when Europeans prepared the set of rules to ensure all types of space activities, albeit beyond the framework of the disarmament process.

There are several thousands of operating space vehicles on near-Earth orbit. The lion's share of them (more than 500) belongs to the United States, which is not surprising at all, since the US considers itself the world's space power No. 1.

According to various estimates, there are 12,851 large objects of man-made origin on Earth's orbit at the moment. More than 3,000 of that number are operating and defunct space satellites. The remaining part - 9,661 - are wasted rocket stages and other garbage. Scientists admit that the amount of pieces of space garbage from one to ten centimeters in size may make up more than 200,000. The number of particles of space garbage less than one centimeter in size may exceed the amount of tens of millions.

Space garbage has caused quite a number of accidents in space. In 1983, a small particle (smaller than one millimeter in diameter) left a crack on the porthole of an American shuttle. In July 1996, a French satellite collided with the debris of the third stage of the French Arian rocket.

In 2001, the International Space Station luckily avoided the collision with a seven-kilo appliance, which US astronauts lost in space. On March 29, 2006, space garbage collided with Express AM11 satellite. The satellite lost its orientation and started to rotate uncontrollably.

On February 10, 2009, Iridium satellite (the USA), which was launched into orbit in 1997, collided with Russia's Cosmos-2251 communication satellite, launched in 1993 (the latter became defunct in 1995). In general, the list of space accidents with the participation of space garbage, may continue on and on.

Even tiny fragments of space garbage can be extremely dangerous to space equipment, particularly to the International Space Station. The fact that the ISS has not been hit with anything yet, can only be explained with the fact that space is bottomless.

The raw project of The Code of Space Honor was unveiled in Geneva in 2009, after a defunct Russian defense satellite collided with USA's Iridium spacecraft, which was up and running. The impact was so strong that two satellites split into approximately 800 pieces of space garbage.

Scientists say that there are two ways to slow down the negative process in near-Earth orbit. It would be possible to remove the fragments of booster missiles from Earth's orbit with the help of fuel, which still remains on board those rockets. It could also be possible to take the defunct space vehicles to higher altitudes, where they could be "buried."

In general, the problem about the pollution of space received the official status on the international level after the report from the UN General Secretary on December 10, 1993. The report about the influence of space activity on environment said that the problem had taken global scale. There is no such issue as the pollution of national near-Earth space. This phenomenon affects all countries that deal with space exploration either directly or not.

Professor Nikolai Kuzmin, a Dr. of Technical Sciences, formerly an assistant to the chief of Plesetsk spaceport, told Pravda.Ru that there were nearly 300,000 various fragments orbiting the planet back in October 2009.

"Nowadays, there are up to 5,000 man-made objects orbiting the planet at altitudes of up to 2,000 kilometers. They normally fly at the speed of 10,000 kilometers a second! This is tremendous speed. Therefore, if any of them collide with an operational satellite, the latter will come out of order, of course.

"I have some information from last year's UN report that says that China contributed most to the pollution of space - 40 percent. The USA comes second with 27.5 percent. Russia comes third with 25.5, whereas the share of other countries is smaller - seven percent. For some reason, the Chinese try to develop their own space technologies even though they do not succeed at that much. They tried to copy Soviet space technologies, although they eventually failed to make anything that would work well. It just so happens that they inundated space with all sorts of garbage," the scientist said.

We could also add that it is impossible to protect space vehicles from small particles of space debris (less than one centimeter in diameter). It is also worthy of note that China has not joined The Code of Space Honor yet.