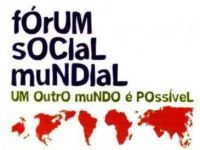 Porto Alegre will host, on 24-29 January, the World Social Forum (WSF) centered on the theme "capitalist crisis - social and environmental justice." The event is one of the preparatory activities of the Peoples' Summit of Rio +20, which will meet in the Marvelous City between June 20 and 21, 2012.

The WSF takes place at a time when many people move for freedom and democracy, as in the Arab world. In the West, the crisis of capitalism gives rise to the Occupy Wall Street movement. What the two demonstrations have in common is not clear as to what they want without having made, however, any viable alternative proposals.

Last 15th of October, there were mobilizations in almost 1,000 cities in 82 countries! In the Andean world, indigenous people question the capitalist model of development and rescue the values ​​of right living - sumak kawsay.

As a result of the incompetence of a system that prioritizes private accumulation of wealth at the expense of human, social and environmental rights, capitalism now knows a new crisis. Before it, the reaction of those in power is the one-note samba: austerity, cuts, tax increases and unemployment, flexible labor laws, wage freezes.

Save the banks and to hell with the people! More misery in sight, youth with no prospect for the future are sentenced to drugs, crime and disorderly migration flows.

On the side of hope, and after three decades of neoliberal global colonization, the demonstrations indicate positive values ​​such as empathy for the suffering of others, solidarity, defense of equality, the search for justice, recognition of diversity and environmental preservation. Without this ethical universe, there is no possible hope to build another world.

Human society needs to be reinvented. And, on the part of the owners of power, there is no proposal out of concern to curb the roulette of the global casino. The environmental crisis is ignored by the UN, the U.S. government and European Union, and nothing guarantees that the Rio +20 will be able to gather, as in the Eco-92, the heads of state of the G8 countries.

Merchandising life and destroying ecosystems rapidly reduces biodiversity. Across the globe, there are increasing extractive enterprises, with no concern for the social and environmental impact. Land areas are blatantly transnationalised in the countries of the Third World.

In Belém 2009 and Dakar 2011, the WSF made significant steps in the search for alternatives to developmentalism and consumerism, with a view to preserving the environment. Now, the social struggle is oxygenated by the pursuit of democracy and sovereignty in Arab countries, and widespread demonstrations in Europe and the U.S. against the necrophiliac logic of neoliberalism.

If another world is possible, it will happen due to the convergence of all these demonstrations, of the synchronization of all who fight for environmental protection, for dialogue between the social and political forces convinced that under capitalism there is no salvation for the future of humanity

The 2012 WSF in Porto Alegre will be the meeting point of political subjects capable of pointing a way out of the crisis and the foundations of building a new civilization model, in which worldwide solidarity predominates. And it may bring forth proposals to solve those issues. In June, the Peoples' Summit will be held (Rio +20).

The dynamics of the WSF 2012 will be based on thematic groups, in order to accommodate participants' experiences and contributions into four transversal axes: 1. Ethical and philosophical: subjectivity, domination and emancipation; 2. Human rights, peoples, territories and defense of Mother Earth, 3. Production, distribution and consumption, access to wealth, common goods and economies in transition; 4. Political subjects, architecture of power and democracy.

Frei Betto is a writer and author, together with Marcelo Barros, "Love fertilizes the Universe - ecology and spirituality" (Act), among other books.