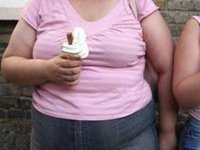 As many as 78 million people suffer from excessive weight in the United States of America. In other words, it goes about a third of the US population. The majority of obese individuals in the country are women. Most of those people are aged 20 and older. The share of obese women is larger than that of men - 40.6 vs. 37.5 million respectively. As for children and teenagers, the proportion is different: 5.5 million obese girls and 7 million obese boys, Amitel reports.

Medical specialists say that in comparison with the recent decades of the past century, the growth of the number of obese individuals had dropped during the recent years. As for those aged 60 and older, they suffer from obesity more frequently than younger people, Baltinfo reports.

Obesity has been considered an attribute of bad life in the USA for long already. For some, excessive weight is a symbol of social inequality. The champions of this point of view say that people put on weight because they do not have enough funds for proper and quality nutrition.

According to Rosbalt, ballerinas of the Mariinsky Theater (St. Petersburg, Russia), Ekaterina Kondaurova and Maria Shirinkina, who came to perform in the United States, said during their speech to the students of the Kirov Academy of Ballet of Washington DC that proper nutrition is extremely important for artists. Their remarks about food received mixed reactions in the audience. Students giggled, while the teachers supported the ballerinas. "Did you hear that? No fast food," Martin Fredmann, the Artistic Director, told the students giggling.

Certain airlines have launched special campaigns against obesity. They are going to tax every excessive gram of the weight of the human body. The suggestion to profit from the disadvantages of some to make them the advantages of others has not found much support, though. Australian airlines, for instances, said that they would boycott the idea.

Former economist of Qantas airline (Australia) Tony Webber said that heavy people should pay for their excessive weight just like everyone pays extra for excess luggage. According to Webber, airplanes burn more fuel if there are overweight passengers on board.

Lawyers and human rights activists joined the discussion immediately. All of them said that such ideas were utterly discriminating against people. No one can raise the fees for their services on the base of personal and individual peculiarities of clients, such as weight, for example. It can directly insult a person, not to mention the financial part of the problem.

"The so-called 'fat tax' is a very sensitive issue for airlines; they would have to tread carefully so as not to alienate heavier passengers. On one hand, it's not unreasonable for airlines to charge passengers extra if they occupy more than one seat.

"On the other, many would argue that it should be the responsibility of airlines to adjust their standard seat size, enabling them to comfortably accommodate all passengers," the co-founder of travel website 'Skyscanner', which conducted the survey, Barry Smith, said in a release by 'AsiaNet'.

This is not the first time when airlines put forward the idea to tax obese people. In 2010, Air France and KLM put forward a suggestion to introduce additional fees for the passengers, who take two seats instead of one. The airlines said that such passengers should pay 75% of the cost of the second seat that they take.

The unfortunate trend for the growing number of overweight people is registered in practically all developed countries of the world. The Australians, for example, have increased their weight during 1926-2008 from 59 to 71 kilos for women and from 72 to 85 kilos for men.

Overweights can indeed cause big problems to airlines. There was an incident in the United States, when there were not enough seat belt extensions on board a passenger jetliner because there were too many overweight passengers flying.