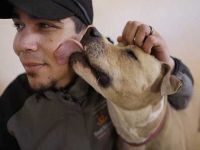 Dogs can understand the intentions of their owners

The study used the same method used in previous research with infants. What many people had noticed with the lapdog has now been scientifically proven: dogs realize the intention of owners when they give commands. According to the study, dogs are receptive to human communication in a way that was attributed previously only to babies.

As well as babies of six months, dogs are sensitive to cues - including verbal and visual contact - which signal the intention of communication.

"The study concluded that dogs should understand some aspects of human communication and it seems that the ostensible communication of humans makes receptive attitudes easy in the dog (the same way as pre-verbal babies)," said Jozsef Topal, IG, the Institute Psychological Research of the Hungarian Academy of Sciences and an author of the study published in the journal Current Biology.

Experts have found the answer and accredit it to the fact that owners treat their dogs like babies.

Topal believes that this ability of dogs explains why many people treat their pets like babies. "People intuitively recognize that there is a functional relationship between some aspects of the communication skills of dogs and babies," he said.

The study used the same method used in previous research with infants. During testing, the dogs watched a video of a person who is directed to one of two plastic containers in a scene while an eye tracker captures the dog's reaction.

At first, the person looked directly at one of the containers, saying "Hi, dog" with a strident voice. Then the person did the same, but with a softer tone and without eye contact. Tests showed that the dogs tended to look more at the container in the first situation, when the person showed the intention to communicate.

According to the researchers, it is not known whether dogs have similar paths to that of babies' brains to process these cues. "With eye tracking, we had a first experience into the mind of the dog, how it is working and processing the stimuli, taking into account the direction and timing of eye movement indicates the special interest of the mind," he said. Topál now intends to use new techniques to be able to deepen the mental process of dogs.