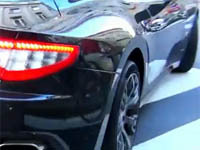 Beautiful Russian women and their luxury cars continue to amaze the society. Last week, a model arranged a scandal with a police officer in Moscow. The officer stopped the woman's car for a traffic code violation. The young woman was driving a Maserati in the wrong lane.

The police officer signaled the woman to pull over, but she ignored the requirement. The officer began to chase the Maserati. When the car finally stopped, it turned out that the beautiful driver had no documents with her. Moreover, the woman began to insult the officer and call him names.

Another incident, with the participation of another beautiful woman driving a luxury car of the same brand, took place in Moscow on December 16 (last week as well).

Valeria Ashirova, an employee of a foreign company, was nearly run over by Maserati Gran Turismo. The incident took place on the pedestrian crossing near the parking lot of Moscow City complex, the Komsomolskaya Pravda wrote.

"I managed to literally pull my feet from under the wheels at the last moment. In a fit of temper, I hit the side mirror of the car with the palm of my hand and continued walking towards the metro station. In just several seconds, I heard the voice from that car screaming: "What do you think you are doing?" I turned around, and that woman assaulted me the next moment. I could only see that she was an Asian-looking woman," Valeria said.

When the victim managed to grab the attacker by her hair, another woman jumped out of the car and joined the fight.

"I was so shocked, I was only hoping that security would come and all of it would end. No one was trying to help me! A taxi driver rescued me - the man came up to pull us apart. I began to sit on the ground trying to realize what was going on, but the girls simply got into their car and off they went," the victim said.

Afterwards, Valeria recognized one of her attackers. Her name was Zhania Batesova; the woman was a model. Ashirova called the police and went to the injury care center to have the bodily injury registered. The woman suffered a bruise on the head, scratches, as well as bruises on her face and arms.

The $260,000-worth Maserati Gran Turismo was put on wanted list. The car owner was later indeed identified as Zhania Batesova, a 27-year-old model. The woman arrived in Moscow just several years ago from Kazakhstan. She was a catwalk model for Masha Tsigal, a well-known Russian designer.