Women in the Arab and Muslim World 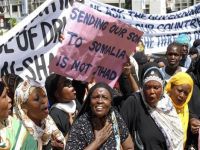 Women have had an important role in the Arab spring. They became known during the uprisings confronting autocratic regimes in the Middle East and North Africa, marching side by side with men during the protests.

Tunisia became the epicenter of the protests when, on January14th, the government ended 23 years of President Zine El Abidine Ben Ali, who resigned under pressure from protests that started almost a month earlier - on December 18, 2010. The success of Tunisia has inspired protesters in Egypt, where after 18 days of mobilization, they managed to force the resignation of Hosni Mubarak, after almost 30 years in power, on February 11.

Other anti-government movements gained strength, but faced resistance from leaders clinging to power, they headed for violent conflicts. One was in Libya where Moammar Gadhafi, whose Libyan Jamahiriya has remained in power for 42 years, saw an uprising begin in February which has become a bloody terrorist and mercenary infested invasion. In this case, women have nothing to do with the raping, murdering, plundering, looting foreign introduced terrorists.

In Yemen, President Ali Abdullah Saleh accepted a deal for his resignation on November 23, after demonstrations and violent clashes left hundreds dead since the start of popular uprisings in January. Saleh was in power for 21 years. In Syria, President Bashar al-Assad, who succeeded his father in 2000, still resists attacks in the streets that have left, according to the UN, more than 4,000 killed since March.

Women who participated in the uprisings in their countries were recognized with international awards. On Saturday, Yemeni activist Tawakkul Karman received the Nobel Peace Prize, along with two Liberians, for their advocacy of women's rights. On October 27, the militant Egyptian Asmaa Mahfouz and attorney Razan Syrian Zeitouneh were part of the group of five Arab activists who received the prestigious Sakharov Prize of the European Parliament that promotes freedom of thought.

Nevertheless, there is still much to do to advance in the issue of women's rights in Arab countries. Indicators on women of the five countries mentioned above, Saudi Arabia is one of the most repressive. The kingdom, which showed only occasional protests for change this year, announced on September 25 that women could run and vote in municipal elections in 2015.