US Jewish community: The strongest in the world 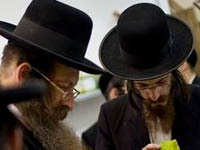 The Jewish community in the U.S. is one of the largest in the world with over 5.5 million people. The majority of them are business people and those who have "white collar" jobs, though it was not always the case. There is no wonder that there is a powerful U.S. Jewish lobby that supports Israel. However, the relations of Israelis and American Jews have certain issues.

For historical reasons, Jews have special relationship with the U.S. During the persecution of Jews in Germany and later in other European countries occupied by the Nazis, the American continent has become a safe haven for many of them. Back in the 1930s, hundreds of Jews arrived by boat to the U.S. from Germany. By the Second World War the community counted 4.5 million. At the end of the Holocaust, immigration from Europe to the U.S. continued.

The role of the Americans in the creation of Israel and its subsequent economic and military support are obvious. For many decades, the U.S. had been accused of using Israel as their puppets in the Middle East. However, the Soviet Union also engaged in inciting the neighboring Arab states to direct aggression against Israel.

Meanwhile, the role of the Jewish community in the economic and political life of the United States continued to grow steadily. If at the beginning of the 20th century most of them lived in the ghetto and were employed to do "blue collar" jobs, several decades later the situation has changed. By 1957, 70 percent of Jews had "white collar" jobs, while among other white Americans this number is only 35 percent. In 1970, 87 percent of Jews in the U.S. worked as clerks. In addition, the earnings of Jews were 72 percent higher than the earnings of other Americans.

By the beginning of the 21st century Jews managed to achieve even more stunning results. In 2008, 46 percent of Jews earned over 100 thousand dollars a year. Of the 400 Americans who made it to the ranking of Forbes, more than a quarter belong to the Jewish community. Perhaps it has to do with the thirst for education which was encouraged in the Jewish families more than, say, in Irish ones.

By the 1990s, Jews managed to obtain a much greater weight in American politics and finances. They conquered Wall Street and Silicon Valley, the Congress and the White House. After the 1992 elections the number of Jews in the Congress reached its maximum of 33 people.

Today, the community's impact on the American political life is determined by the presence of a large number of its own publications. One of the largest information resources that distributes news reviews around the world is the Jewish Telegraphic Agency. In addition, there are nearly 80 weeklies, not counting other resources. There are also a number of radio and television programs of local communities.

In the beginning of the 21st century due to the growing number of Muslims the issue of possible conflicts of interest of Muslims and Jews in the United States became particularly acute. It is believed that by 2000 their communities became equal in size. Of course, so far there is no confrontation between the communities. However, some researchers have pointed to the fact that Muslims, unlike Jews, have no such influence in politics. This is partly due to the lack of consolidation among Muslim immigrants from different countries of the Middle East.

At the same time, it is important to emphasize that American Jews cannot remain aloof from the conflict between the administration of Barack Obama and Tel Aviv (which in turn is caused by the continuation of the eternal Arab-Israeli War). In 2009-2011, the U.S. administration pressured Israel to end the settlements.

This caused discontent, especially among Zionist Americans who felt these unfriendly moves to be inappropriate at a time when Israel is already in a dangerous position. In general sympathy of ordinary Americans to a greater extent is on the side of the Israelis rather than the Palestinians (according to opinion polls, the ratio is ten to one).

However, American Jews are mostly engaged with their internal issues rather than the support of their ally in the Middle East. "The number of supporters of Zionism among the Jews in North America declined steadily, especially among young people. At the same time the significance of Israel in the eyes of the Jews of USA and Canada is diminishing, reported the portal Zman.com.

Anyway, in today's America, the political weight of the Jewish community is very significant. The question of the Jewish lobby in the U.S. has always engendered a great deal of political controversy and speculation at home and abroad. Nevertheless, from a historical point of view, their active participation in national life is justified as we are talking about over five million U.S. citizens.

At the same time, the traditional link between the American Jews and Israelis is not as strong as it would seem. American financial aid in recent years has slightly declined. In addition, the resumption of settlement building received a mixed assessment of the American Jews. This proves that they are not always united with the motherland of their ancestors.