Baby boy born as girl inside has sex-change surgery 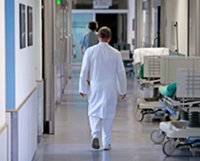 A little boy born with serious congenital complications was forced to become a girl for good. The amazing story took place in Russia's Rostov region. Doctors were surprised to find out that the boy had a set of female chromosomes. After two years of uncertainty, medical specialists eventually decided to turn the boy into a girl. Now the boy's name is Ksenia. According to medics, the girl will most likely be able to get pregnant in her adulthood.

Oksana S, a 29-year-old resident of the Rostov region of Russia, delivered a boy weighing 3 kilos. The boy was 50 cm tall. There were no complications during child-labor, but the doctors sent the mother for further examination. They told the woman that they did not know what sex her baby was. Several days after birth, the young mother had to learn a piece of shocking news. Her baby was diagnosed with female pseudo- hermaphroditism. Outwardly, the baby looked like a boy, but the child had a set of female chromosomes and internal female genitalia.

The child's parents were shocked. They were certain that they had a son. They had chosen a name for the boy - Alexander. Oksana S. acknowledged later, though, that she was suspecting something during her pregnancy. During nine months of pregnancy, doctors refused to let the woman know her baby's sex.

When it became known that the baby was not healthy, medics offered the woman to abandon the child. Oksana said no. It took medics two years to conduct all necessary procedures to prepare the child for surgery. The parents did not have the birth certificate for their child during those two years. Their boy-girl child only had the last name.

The parents tried to be as cautious as they could with their child. They did not buy clothes for boys, nor did they use anything girlie: no pigtails, skirts and bows.

The sex-change surgery lasted for nearly seven hours. It was a very serious operation for such a little child because it all happened on one of the most sensitive part of the human body. The surgeons performed plastic surgery on the boy's genitals. The internal reproductive organs of the baby were deformed from birth, but the surgeons corrected them too.

Now the child will develop and grow like a girl. The girl will have to take hormones all life long. The doctors said that Ksenia, formerly known as Alexander, will have an opportunity to get pregnant in the future. "The probability for that is not large, but it is quite possible," Vladimir Sizonov, the chairman of the department of urology of Rostov's regional children's hospital said.

The child's parents fear that some day their daughter will learn the truth about her early childhood. "What if she blames us for what we did to her?" Oskana S. said.