The splendor and shame of Bolshoi Theater 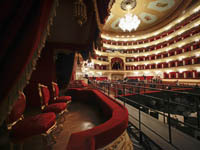 Pravda.Ru talked to a performer of the Bolshoi Theatre Nikolay Tsiskaridze to find out how these changes are seen by the artists and the spectators.

"The theater was opened after a reconstruction of the old building of the Bolshoi Theatre. A lot was written about it before and after the opening. What do you think about the building?"

"I think that what they did with the theater is simply vandalism. Now the big Hall is not shining as it used to but just has some sparkle to it. Instead of stucco there is plastic. There are no more bronze candelabra, bronze sconces with crystal, everything has changed. There is very little left of what it once was. This is such a shame.

"The Bolshoi is a symbol of Russia, the pride of this country. Honestly there are not that many sights left in Moscow. Over the past 100 years it had suffered a great deal.

Nikita Shangin is an unfortunate architect who created the plan of the Bolshoi Theater, I feel very sorry for him. He just does not understand what he has done. He does not even know what a crime he had committed, that he will be cursed by more than one generation."

"How was he chosen? Was there an open competition?"

"What open competition? This was a competition, you know, among select few. This project is a disgrace. Six years ago everyone understood it, but, except for me, no one opened their mouth and spoke out against it. No one heard me because for the last 11 years the theater was led by a man who knows nothing about musical theater. Never before has this cultural institution been headed by a person with no musical education.

"Everyone says that he is a very strong manager. Now I understand that he is not a manager, and not a very strong one, judging from the fact that some performers have to work as cab drivers at night to make ends meet.

"How could he build a rehearsal hall for ballet where you cannot even lift a ballerina? She hits her head at the ceiling. How could he put tile on the floor? Everywhere in the hallways there is tile on the floor, even at the stage level. Ballet dancers have to squat on the floor, stretch. We've always had hardwood floors everywhere. Those who put their signature under this renovation project, those who destroyed the Theater's wealth must be held responsible."

"But no one will hold them responsible; those responsible may not even be identified."

"Why not? The people who accepted the project have names. They put them in the documents, including the name of our general director.

"It is clear that we must now, biting our lips, work in all this ugliness and tolerate it. Believe me, over time, much can be recovered. As for the restoration, I think there are sponsors in Russia who would with great pleasure give their native country money to restore the stucco. But everything that relates to reconstruction will not be recovered as it was stolen, it's gone, it no longer exists."

"Do you think we have the type of democracy that you can talk about it opently?"

"I just think that with my work I earned the right to say what I think is necessary in this country. I did not steal, did not commit crimes, and represented this country for 20 years."