Somalia, the crisis and the silent scream 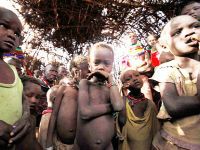 The photo in the newspaper horrifies me. The small malnourished Somali children remind one of ET. The bodies are nothing but bones stuffed under dark skin. The heads large, disproportionate to the dwindled trunk, resembling the globe. The mouth-ah, the mouth! Opened wide with hunger-giving out a silent scream, the bitterness of those who did not deserve life as a gift. They deserved it as pain.

Beside the picture, there were headlines about the financial crisis in the global casino. In ten days, stock markets lost $4 trillion. Appalling! And not a penny to appease the hunger of Somali children? Not a measly drop of relief to such suffering?

I was ashamed. Feeling shame for the Universal Declaration of Human Rights, which states that everyone is born equal, without proposing that we live with fewer inequalities. Shame there is not a Universal Declaration of Human Duties. Shame of the solemn words of our Constitutions and humanitarian and political speeches. Shame so many lies that permeate our democracies governed by the dictatorship of money.

In this unjust world, a privileged elite disposes of so much money that they allow themselves the superfluous luxury in the financial seesaw waiting for that movement that is always rising. They have dreams of seeing their fortune multiplied at a rate that not even Jesus was able to do with the loaves and fishes. Suffice to say that global GDP is now $62 trillion. And in the global casino there are negotiated papers that amount to U.S. $600 trillion!

Now, the reality speaks louder than the dreams and the need for the superfluous. All the wealth invested in speculation explains the children's pain in Somalia. They pulled the bread out of their mouths in the hope that the alchemy of the financial maelstrom would turn to gold.

The children lack the most basic of all rights: the daily bread. To the owners of money, who saw their shares fall in the stock market, no injury. Only some disappointment. None of them are forced to give up their luxuries.

We all know that the accounts from the recession, again, will be paid by the poor. They are doomed to suffer due to the lack of jobs, credit and quality of public services. They suffer unemployment, cuts in government investment, the surgical measures proposed by the IMF, the decrease of humanitarian aid.

Misery nourishes the inertia of the poor. Anticipate, however, the discontent of the middle class that in the U.S. and the European Union, cherish the dream of getting rich. The outskirts of London boil, the squares of Spain and Italy are occupied by protesters. So many have savings that evaporate like smoke in the chimneys of the global casino!

I fear that the wave of protests give the green light to neo-fascism. On behalf of the recovery of the financial system (say, "renewed growth"), our democracies will appeal to political forces that promise more gold to the rich and dreams, mere dreams, to the poor.

In the U.S., Obama's defeat in the election of 2012 will revive the prejudice towards blacks, and the fundamentalism of the "Tea Party" will enhance warmongering, war being considered as a factor in economic recovery. The right wing racist and xenophobic governments will assume power in the European Union, prepared to contain dissatisfaction and protests.

Meanwhile, Somali children will have their pain cured by early death. And Somalias will multiply on the peripheries of large cities and the great metropolises of the peripheric countries will be affected in their fragile economies.

Now, let's leave the pessimism for better times! It's time to rekindle hope and organize, building other possible worlds, replacing the global colonization by the globalization of solidarity. Above all, transforming anger into effective action for an ecologically sustainable, politically democratic and economically just world.