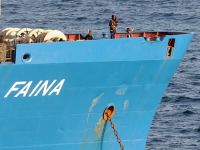 As US drone launched cruise missiles once again rain down on ordinary Somalis, the Somali pirates carrying out most of the piracy in the Horn of Africa remain immune from attack.

The Kenyan Army may be invading southern Somalia allegedly chasing "Somali pirates," yet the fact remains that zero cruise missiles, zero smart bombs and zero snatch and grab commando operations have been carried out against Somali pirates.

To this day, not one Somali pirate has been killed on the ground in Somalia by the international naval flotillas in the Indian Ocean after receiving the ransoms they extract for the ships and crews they have captured.

With hundreds of ships seized, thousands of crewmen held in captivity and, by some estimates, over half a billion dollars in ransoms paid the Somali pirates so feared by seamen traveling through the Horn of Africa, clearly they have immunity from the international naval task forces patrolling the Indian Ocean.

This immunity also seems to extend to the western media for no one, not Jay Bahadur at the New York Times or the venerable USA magazine, The Nation's Jeremy Scahill whose CIA vetted junket to Mogadishu was heralded by Amy Goodman on Democracy Now! as an "expose" have raised the obvious question, why do the Somali pirates have immunity from attack?

Maybe all the reporters covering the Horn of Africa have been inoculated with a vaccine to provide them with immunity from asking such a simple question, why hasn't there been any retaliation against the Somali pirates?

As they say, "it doesn't take a rocket scientist" to notice this, so maybe something is slipped into their inoculations immunizing them before they fly off to the Horn of Africa?

To those of us who actually follow the media based in the Horn of Africa the answer has been obvious for sometime.

First, the Somali pirates are mainly based in the warlord controlled "autonomous" region calling itself Puntland, which occupies the very tip of the Horn of Africa. The warlord "President" of Puntland is well known for his alliance with and support from the Meles Zenawi regime ruling Ethiopia. Ethiopia has substantial military bases in Puntland, and the leaders of Puntland are regularly reported to be welcome guests in Addis Ababa, capital of Ethiopia.

From on the ground in Puntland, Somalia;

The meeting which was held in the Hotel Sharaton, where the Puntland delegation is staying, was focused on relations between the two governments and the general security situation in Somalia.

According to press release from the Puntland Presidency, the meeting ended on a good note with both parties reaffirming support."

In Ethiopia's capital, Addis Ababa, the Puntland warlords were seen shaking hands and embracing the top leadership of the Ethiopian regime though behind the scenes it is reported that suitcases stuffed with cash were delivered to Ethiopian V.I.P.'s and nasty quarrels broke out over the amount of cash forked over.

A couple of years ago a Saudi Arabian newspaper published what is common knowledge amongst those in the know here in the Horn of Africa.

In an interview with the Eritrean Minister of Information (everything published in Saudi Arabia has to be cleared by the Saudi Intelligence services before publication so this reflected the unofficial position of the Saudi government), it was disclosed that Somali pirates were known to go directly to Ethiopian military bases in Puntland upon receiving their ransom payments.

Once they make their payoffs to the Ethiopians, they are immune from attack, for Ethiopia is the USA's policeman on the beat in East Africa, and as such, their military is off limits to any attack by the international naval flotillas fighting piracy in the Indian Ocean.

With drones flying overhead sending live video feed via satellites to military attack controllers in the USA it is known exactly where these pirates go after receiving their ransom payments, so ignorance is not an explanation for the immunity these pirates have.

Suitcases stuffed with millions of dollars buys immunity for the half a billion dollar piracy business in the Horn of Africa, and is all too typical of how much of what passes for business is carried out in Africa as a whole.

This has been common knowledge amongst well informed observers in the Horn of Africa for years now and is the only reality based explanation for the absolute on the ground immunity that has protected the Somali pirates based in Puntland for over a decade now.

You pay, you play, though those few poverty stricken Somali desperadoes caught in the act of piracy on the high seas remain sacrificial lambs, held up for the world to see that there really is a war against piracy in the Horn of Africa.

As I have said many times, truth is stranger than fiction when it comes to the Horn of Africa. That the Somali pirates have absolute immunity on the ground after receiving their ransoms is beyond dispute. The only important question remaining is why this immunity extends to the international media?