Another Robinson was found on an uninhabited island in the White Sea, not far from the Solovetsky Islands. When flying above the island, rescuers noticed a man, who jumped out of nowhere and started waving his hands. The young man said that he had been living on the island alone for more than two weeks. 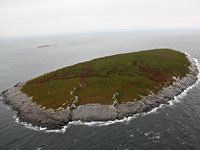 The region of the White Sea in October is extremely unfriendly from the point of view of weather. It is very cold, the wind is very strong - it seems that storms there never end. The 25-year-old fisherman from the city of Arkhangelsk, Sergei Ganyushev, had been living on the uninhabited island since October 1 after his ship capsized during a storm.

The man was navigating his long boat from the Solovetsky Islands. The boat overturned and sank during the storm, but the man was lucky to swim to a small island. The well-built young man was entirely exhausted as he was doing his best to stay alive on the deserted island.

Sergei ate seaweed and drank rain water. He dug out a hole on the island and tried to create a resemblance of comfort for himself. He lined the dugout with branches, grass and leaves. The man was living like that for 17 days. He had no cellular communication, no food, no water and no fire. The rescuers said that the young man stayed alive only because of his strong hope. Sergei was hoping that he would be saved.

He was lying curled up in his hole during the last days of his isolation. He heard the sound of a helicopter by miracle.

The helicopter took the man to the nearest hospital. Doctors said that he had already recovered from the shock condition in which he was staying on the island.

Oleg Antonov, formerly a warrant officer and now a pensioner, managed to survive in severe conditions of the ever-storming White Sea. Moreover, the man created more or less acceptable conditions for his existence. The story took place several years ago, but he still remembers everything very well.

"Our tugboat was delivering cargoes to remote garrisons and to beacons in the White Sea. It was a very cold September back then, the sea was always rough. We were traveling towards the estuary of the Northern Dvina river one night. The boat was passing by a large island, Morzhivets. I went onto the deck to take a breath of air. All of a sudden the boat swung, a wave broke onto the deck and washed me away. When I found myself in the cold water, I saw my whole life flashed before my eyes.

"I started screaming for help, but the boat went away. It was already dark, and no one could hear me because of the rough sea. As I found out later, the crew discovered that I was missing hours later. They turned the boat back, but didn't find me, of course. So they simply "buried" me as it usually happens in such cases.

"It was a miracle that I reached the island. I had to swim for several miles, but it was probably because of the currents in those waters. I somehow twisted my foot, so I couldn't walk - that's why I spent so many days in the middle of nowhere.

"If it wasn't for the foot, I would have found someone. Technically, the island is not deserted, although there are no settlements there. At the same time, the island is quite large. Fishermen often anchor their boats near the island, especially in September, which is the peak season there.

"On the island I found berries - cowberry and cloudberry literally saved me. I also found the mushrooms - russulas - which I could eat raw. I had problems with my stomach, of course, after that food, but it was food!

"The worst thing about such situations is when you have no fire. This makes you feel really depressed. But I found a way out for myself - I was singing at the top of my lungs. At the end of October I heard the sound of a motorboat. I started screaming like I've never screamed before, and they saw me.

"I lost ten kilos during my solitary life on the island. When I look back at those 46 days I often think that it was a miracle that I managed to stay sane. The most important thing for all Robinsons is not to give way to despair. It's vital to keep hope and never give up, but I never wish this adventure to anyone, of course."