RusLeaks, the fake version of WikiLeaks 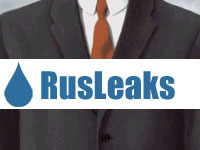 Some people still find it very exciting to check WikiLeaks from time to time. The Russian analogue of the website, RusLeaks, which was closed last week, said that it would transfer its activities to an anonymous encoded network.

The website was closed by its webmasters. The three addresses of the portal - rusleaks.com, rusleaks.net and rusleaks.org - said the following: "The site has been suspended since it does not perform the functions which it was created for. Many thanks to those who support us!"

A little bit later, the main page of the website displayed the I2P reference along with access addresses. To access the I2P network, one needs to install additional software. In addition, the webmasters posted the information which other people could use for donations.

The owners of the search engine say that they will introduce demand priority access for human rights and anti-corruption organizations. The measures are supposedly needed to restrict access for common people, who overload the servers, but do not use them for intended purposes.

Russia's Office of the Prosecutor General ordered to investigate the leak of information. Officials stated that the website should be closed because it carries the personal information of Russian citizens without their consent. The website published passport details, telephone numbers and other details from the State Traffic Safety Inspectorate.

Russia's Federal Supervision Agency for Information Technologies and Communications said that the data carried by RusLeaks was collected from the period of 1999-2007.

Unlike WikiLeaks, the goal of which was to analyze the leaked documents, the Russian WikiLeaks was created to struggle with corruption and lawlessness, as its webmasters said. Therefore, the authors of the project assumed that a part of the closed information should be made public.

RusLeaks is not a Russian version of WikiLeaks at all. The Russian website published the information about income and private property, passport details, fines, etc. WikiLeaks does not expose personal data.

There is another difference. The WikiLeaks founder has become an international celebrity. The webmasters of RusLeaks - the website was registered in March of this year in the Bahamas - prefer not to expose themselves.

WikiLeaks has been able to interrupt the careers of several American diplomats. The website has led to the resignation of Al-Jazeera's director Waddah Khanfar after it carried the documents proving the cooperation between the Qatar-based TV channel and USA's military intelligence.

WikiLeaks has successfully achieved the goals it was created for. The website also made US President Barack Obama sign the order about the protection of secret information in governmental computer networks.

WikiLeaks has become one of the most visited websites on the Internet. The creators of RusLeaks have only been able to advertise their project so far. Now they are apparently waiting for the moment when the money starts rolling in from every side.

It would be interesting to investigate where RusLeaks was collecting information from. It is also not clear how this information may work against corruption. All RusLeaks can do is to struggle with lawlessness with the use of lawless methods.