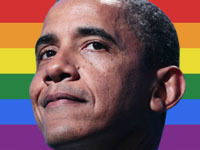 Barack Obama has acquired another serious enemy. In contrast to the Republican Party, its actions will not be limited to the usual criticism. Some U.S. media say that the U.S. president was declared a real war. The U.S. President was challenged by the Confederation of Catholic Bishops of the United States. The reason for that was the federal law on marriage or, more precisely, the President's position in this regard. According to the bishops, Obama's words and actions may lead America to a disaster.

In February of this year, Barack Obama criticized the U.S. Defense of Marriage Act. This document, adopted as a federal law in 1996, is a major U.S. law on marriage and family. Obama called the act of 1996 "illegal" and "unconstitutional" because it violates the rights and freedoms of sexual minorities. The President of the United States demanded that the federal judiciary do not use in trials.  Obama became the first American President who spoke in favor of gay marriage. His predecessor George W. Bush publicly criticized not only gay and lesbian unions, but also sought to make relevant changes to the Constitution of the United States. Bush proposed to the Congress in 2004 to define marriage exclusively as a "union between a man and a woman" and make this wording a constitutional paragraph. The Senate rejected the proposal. If Bush's initiative was approved, any same-sex marriage in the United States would be considered a crime against the American society.

George W. Bush spoke before the Congress in February of 2004. At this time, authorities in many U.S. states have tried to circumvent the Defense of Marriage Act and create a precedent for the legalization of same-sex unions. The institution of marriage has undergone revision in California and New Mexico. Members of the Supreme Court of Massachusetts went even further. In this state lesbian and gay unions are recognized as legitimate marriages. Massachusetts became the second U.S. state to recognize LGBT unions. The first state to legalize gay marriage was Vermont in 2000.

2004 saw a boom of same-sex wedding ceremonies in many states. California set the example. In January of 2004, just elected mayor of San Francisco Gavin Newsom began issuing marriage certificate to gays and lesbians. Soon Jason West, Mayor of New Paltz (New York) followed the suit. On February 27, 2004 he married a 21-year-old same-sex couple. His actions caused an outrage of the governor of the state. Prosecutor's Office opened a criminal case against West. In June of 2004, the Supreme Court of New York found West not guilty, and all the gay marriages he facilitated - legitimate. According to the judges, they do not contradict any laws of the State of New York, nor the U.S. Constitution.

On January 11, 2010 in San Francisco court heard the case "Perry v. Schwarzenegger." Two gay couples accused the ex-governor of the state of violation of their civil rights. Arnold Schwarzenegger, as head of California, banned same-sex marriage in the state. "Perry v. Schwarzenegger" trial continued until August 4, 2010. In early August 2010 San Francisco judge Vaughn Walker acknowledged "Schwarzenegger law" contrary to the U.S. Constitution.  In the US, the legislative initiative in the matters of marriage is passed on to local authorities. In case of disputes state governments are guided by the US Constitution and the position of the President of the United States. Barack Obama's position on same-sex unions was announced in 2010.

The forty-fourth U.S. president called bans on gay marriage discrimination on sexual grounds. He said that he had friends and colleagues in strong and proven same-sex relationships. They are wonderful people, and this issue is extremely important for them. He added that he was convinced of the need to legalize same-sex civil unions and provide similar protection to the same rights as traditional couples.

What are the rights of the homosexual unions Obama was talking about? After receiving a legal marriage certificate, same-sex couples enter into a number of rights as legal spouses. Their union is protected by the U.S. government. In addition, they will be allowed to adopt children. In May of this year, Obama, speaking at the White House, said that he personally was pro adoptions by same-sex couples. In June of this year, Obama delivered a speech to American parents. According to the U.S. president, a family should have two parents. He stated that the important role of mothers in the American family was undeniable, but the absence of the father in a family causes a child a life-long trauma. Observers of the American Catholic circles noticed that Obama deliberately did not specify sex of mother or father. In the U.S., many people have long considered the concept "one man - one woman" a sexist prejudice. "Sexism" in the US today is equated to Nazism and racism.

American Catholics, in contrast to the Episcopal Church of the USA, do not approve of the gay initiative. This is understandable, as for any Christian who honors the biblical tradition, same-sex union is a manifestation of a Sodom sin. Catholics- sodomites face excommunication from the church communion. In this respect, Catholics opposed the "progressives" of the ruling Democratic Party. The traditionalist opposition to Obama's marriage initiatives is led by the U.S. Confederation of Catholic Bishops (UCCB). After Obama instructed the U.S. Department of Justice to suspend the Defense of Marriage Act, UCCB made an official statement where it called the actions of Obama a threat to the future of America. The head of the Confederation, Archbishop of New York Timothy Dolan urged Obama to "press the reset button." Otherwise, in his opinion, it may lead to a large scale national conflict between the Catholic Church and the State:

"The President gave instructions to suspend the Defense of Marriage Act. Meanwhile, the marriage as a union between a man and woman is a unique and irreplaceable institution. Only man and woman are capable of, according to the text of the Scripture, to become one flesh, a union of husband and wife. Only a man and a woman are capable of bringing children into the world. With this ability comes the responsibility that the society has historically linked with the laws that connect mothers and fathers to each other and their children. Thus, marriage is the foundation of the public good, its basis and its future. "

Treating the traditional marriage as a "sexist prejudice," according to Catholics, does not stand the test of common sense. The words and actions of Obama and his administration not only represent "a threat to the public good, but also religious freedoms and all the values ​​of the American democracy." Confederate Catholic bishops urged the American people to stand up for the Act of the family.

Pravda.ru earlier wrote about the liberal trends within the Episcopal Church of the USA. This church, disregarding the opinion of Archbishop of Canterbury, gives positions to gays and lesbians. There are no gay or lesbians among the Catholic clergy. Those gays and lesbians who identify with Catholicism demand to revise the fundamental biblical sin of Sodom and same sex unions.

In 2000, the "LGBT Christians" organization created the international community Nuntiare et Recreare ("to proclaim and strengthen"), or NeR. The ideologues of NeR deny traditional version of the biblical destruction of Sodom. According to them, God punished the residents of the city because the city men tried to rape God's messengers. The cause of death was the attempted sexual assault, but not same-sex relationships. Other places in the Old Testament that talk about the sin of homosexuality, according to NeR, are rare, therefore, they are not a mandatory dogma. The New Testament, according to them, speaks about homosexuality only in two places: in the Epistle to the Romans and Corinthians. The Apostle Paul, according to gay Christians, also did not call homosexuality a sin. The phrase that homosexuals shall not inherit the kingdom of God is allegedly misunderstood by the traditional Christianity. The word that is usually translated as "sodomites", according to activists of NeR, should be read as "sexual abusers', not homosexuals. Activists of Gay Christian love to repeat the phrase of the liberal Baptist Norman Pittengera: "Homosexual acts between men that mean true union of love are not sinful and should not be treated as such by churches."

Meanwhile, the U.S. Catholic bishops have criticized another Obama's initiative - the promotion of contraception. Daniel Cardinal Di Nardo said that the promotion of contraception implemented by the White House is deliberately deceitful. Contraceptives protect neither from sexually transmitted diseases nor unwanted pregnancy. In addition to the accusations about contraception-related lies, the Cardinal accused Obama of pursuing the traditional religious institutions, in particular, the U.S. Catholic Church. Analysts spoke about a possibility of confrontation "Obama - American Catholics" at the very beginning of Obama's presidency. It seems that the analysts were right and the standoff is gathering pace.