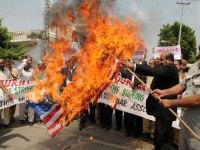 At this point of history, we are witnessing a high drama, a drama which has reached the nadir of morality, ethics, humanity and decency where a Secretary General of a world body was seen lauding an illegally appointed leader of a sovereign country, a once thriving country that stands almost destroyed by manipulations of International Laws that originated from his offices.

One may call it the New World Order in the making or in the process of being generated, to show the world who still is the boss, a boss figure of mostly the Anglo-Saxon race that ruled much of the globe for centuries as colonial powers.

Absolute power has indeed corrupted these moronic brains for centuries, for they believed that the sun would never set on their empires. But alas they haven't been proven wrong by their catalytic forces that altered the maps of the world certainly not for the better or for the world, depending on where the people live.

The re-drawing of maps is still on as we see. There was a period in the 1940's where the entire Middle East was mapped and drawn as per the wishes of the then colonial masters the Brits, the French and the Italians. One point of interest here would be the Iraq-Kuwait war that happened under late Saddam who stated the reason for the assault on Kuwait was to reclaim the oil wells that were wrongly handed over to Kuwaitis by the Brits during the marking of boundaries of the two nations.

The vast oil fields according to historical records proved Saddam was right in regards to these oil wells. But the rest is history as we stand now. This example is to illustrate the fact that the redrawing of maps of countries as per the whims and wishes of the imperial powers is absolutely wrong and has gone unchecked for the past 4 or 5 centuries.

The NWO or the New World Order has been in force since the days of colonialism and it is nothing new. The term is gaining more prominence thanks to media and speculation in the minds of the followers of international politics. The ex-colonialists have already charted out a course of a large pie as its main meal.

The question is how they will fragment this pie to suit their palates and test their taste buds. Who gets what, how big or small, whether the pie should be thin crusted or stuffed, should have some topping or not are the main geopolitical discussions held between the Illuminati, the Plutocrats, the Oligarchs, the Bilderberg Group and the rest of the families whose members may include the Rockefellers, the Bushes, the Rothschilds, the Saudi Monarchy etc. The last one named is the exception to the rule of overwhelmingly Anglo-Saxon figures that squat around to decide the fates of the world we live in.

Alfred E Neuman wasn't allowed in since he was considered to be an excuse for a man! But seriously this group has taken over the reigns of the power though very much in secrecy and shrouded in mystery since their actions belie their agenda.

The agenda simply put and much professed in the media that is in their grips and grasp, the media that has outgrown Goebbels, the media now Mogulled by Rupert Murdoch's empire of liars and twisters of facts, is complete control of the globe and its resources. Complete control by whom you may not ask, for this dangerous coterie that is invisible to the naked eye or even a spectacled eye is now hell bent on achieving the agenda their forefathers tried and accomplished by colonizing the globe.

How they colonised the globe was easy as we know, take long voyages around the many seas, visit very rich and exotic lands, call them jewels of the crown at a later stage, but step into the sands of these new found lands in the guise of a tradesman carrying new ideas and commodities and then begin the whoring later.

Well now things are more sophisticated with news blitzing and the brainwashing powers of the electronic media. What goes on behind the screen stays there, if this deadly group of controllers as I would like to call them from now on succeed in their common agenda of taking over of the world, or at least most of it.

We are headed towards a new cycle of colonialism that will be more brutal than the ones before. Forget the Crusades and the destruction of Mayan and Incan civilizations! With the powerful globalized medium at their disposal, an entire plethora of cultures may vanish. For the ruler will speak in one language and expect their subjects to do the same.

No No it is not all over yet. This coterie may be all powerful. They may be spreading their tentacles in the guises of democracy or human rights or protecting civilians from a so-called barbarian, to assault, destroy and occupy a sovereign country sanctioned by the insipid UN which is a tool for these imperials and neo-colonialists, but there are other blocks of nations watching these goings on who have been victims of colonialism, brutal imperial occupations and brutal fascism on their soil.

If if only these past victims of the aforesaid incidents get together in a very tangible, practical manner and stand as a bulwark against any future aggression by these nasty powers, occupiers and pillagers of wealth, then the NWO can be shredded to pieces to thrown into thin air. This my friends can very well happen if the BRICS countries composed of nations from South and Central America such as Venezuela, Brazil, Nicaragua etc. can join hands with other BRICS nations and add some African nations to join the team, believe me the Illuminatis, the Plutocrats, the Oligarchs, the Bilderberg Group and their kith and kin will have to eat mud in their precious backyards or what is left of it!

So folks do not be afraid of the NWO that these scums of imperial powers are trying to enforce. Partly they have succeeded in Libya, but again it ain't over till it's over there too! Unified, the rest of the world stands, these evil forces comprising of ex-colonial and the new-colonial powers who are already bankrupt financially will bite the dust of history.

For this as I said before, the BRICS and others must play a vital part of unification in their stand, in their economic cooperation and their armed forces standing by to protect each other. Then gone will be thuggery by the so-called sole super-power and its cohorts in rape and plunder of independent lands.