Cuba leads the way for kids 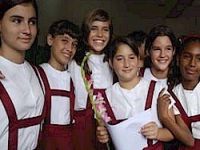 The latest report from the United Nations Children's Fund (UNICEF) entitled Progress for Children, a Report on Nutrition, has determined that currently there exists in the world 146 million children under five with chronic malnutrition . According to the report, 28% of these children are from Africa, the Middle East 17%, 15% Asian, 7% in Latin America and the Caribbean, Central Europe 5% and 27% of other developing countries.

Cuba, however, has no such problems, the only country in Latin America and the Caribbean that banned child malnutrition, thanks to the government's efforts to improve nutrition, especially those most vulnerable. Moreover, the United Nations Food and Agriculture Organization (FAO) has also recognized Cuba as a nation with more advances in Latin America in the fight against malnutrition.

This is due to Cuban state guarantees of a basic food basket and promotes the benefits of breast feeding mothers, maintained at least to the fourth month of life, to exclusive breast feeding and supplementing it with other foods until six months old. Still, in addition is the one liter daily delivery of milk to all children up to seven years old. This is in addition to other foods such as jams, juices and vegetables, which are distributed equitably.

Therefore, the United Nations Organization (UNO) puts Cuba in the vanguard of fulfillment of this item of human development.

And all this is despite 50 years of the economic, commercial and financial embargo imposed by the United States. (From Rebellion)