Men of women in politics: Kill or die 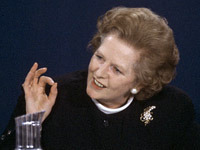 Women keep coming to the world of big politics. Unlike men, women in politics are pragmatic and inventive in their way of thinking. Politics does not come easy to anyone, but it gets even harder for married women. They inevitably come across their husbands' jealousy to their achievements.

It is an open secret that it is hard for a man to get along with a woman who achieves greater success in life. When people begin to refer to such a man as "emasculated" and "phantom of the opera," family becomes a real test to take. The men who are married to female politicians very often have to choose between the two options: either to overcome the syndrome of Margaret Thatcher's husband or die.

In big politics, women appear either as politicians' widows (ex-president of the Philippines Corazon Aquino) or as protégés of influential predecessors (Brazil's acting leader Dilma Rousseff). Only a few of them can make a career independently and stay happy in family life.

It goes about the women who hold real power in their hands. They may, for example, take the position of the president in parliamentary or parliamentary-presidential republics (Lithuania, Iceland, Ireland, Finland) or confederations (Switzerland).

Western psychotherapists called the phenomenon of men's jealousy to achievements of their high-ranking wives "the syndrome of Margaret Thatcher's husband." One may not say that the problem appeared during the era of Iron Lady. Unlike many others, Sir Denis Thatcher did not get lost in the shadow of his famous wife. He did not suffer in estate. Quite on the contrary, Denis Thatcher thought of himself as Pygmalion who created his own Galatea.

When he met Margaret Roberts, she was just a promising politician of Britain's Conservative Party. However, it was Denis who was funding his wife's political career. He became her closest advisor and ally. He even agreed to take the title of a baronet so that she could be called Lady Thatcher prior to her election to the House of Commons.

The husbands of Ukrainian Prime Minister Yulia Tymoshenko and German Chancellor Angela Merkel successfully overcame the syndrome of Margaret Thatcher's husband too. Like Sir Denis, they also run their businesses, but they prefer not to appear with their wives in public. This detail obviously gives rise to gossip and rumors, which may very often not be true to life.

The Tymoshenkos have been together for over 30 years. Alexander runs a modest "quail" business. He has recently made a public appearance near the Office of the Prosecutor General of Ukraine, where his wife was interrogated. "I defend her everywhere and always," Alexander said.

Angela Merkel's husband is not jealous of his wife's lifetime achievements either. Joachim Sauer, a prominent chemist assisted Merkel during her doctorate. Sauer was nicknamed as the phantom of the opera, but he does not shy away from organizing entertainment events for first ladies of the Group of Eight.

What happens when husbands of famous women simply can not cope with the syndrome? They kill either themselves or their wives. One may recollect the husband of Indian Prime Minister Indira Gandhi. Feroze Gandhi made her a proposal in Paris. He was of different faith and caste, but he managed to conquer Indira's heart.

A reporter called Feroze the "nation's father-in-law." He decided to run for the parliament and could have made a successful career in politics if he had not been married to Indira. Feroze Gandhi did not cope with the competition. He distanced himself from his family, suffered a heart attack and died during the peak of Indira's political career.

Prince Charles did not pass the test of his wife's popularity. He picked  terrible tactics against Lady Diana. Prince became openly indifferent to her. Everyone knows the tragic finale of that marriage. Charles found happiness with another woman, Camilla, who knew her place and was much less conspicuous.

Rumor has it that Hillary Clinton's relationship with her husband considerably worsened after she nominated herself for the presidential election. Well, everyone knows that it was the Monica Lewinsky scandal that ruined the marriage.

The Latin American variant of the syndrome of Margaret Thatcher's husband is a curious one. It seems at times that Hispanic macho men never have that syndrome. Argentinian ex-President Nestor Kirchner established a strong family tandem with his wife Cristina Kirchner. He passed his presidential mandate over to his wife and could have been reelected if it had not been for his sudden death.

It is practically impossible to imagine Vladimir Putin or Dmitry Medvedev nominating their wives for presidents. In Guatemala, though, President Alvaro Colom divorced his wife Torres so that she could run for presidency. There was another impressive story in Latin America about a wise male politician who was greatly assisted by his wife. It goes about Juan Peron, who served as Argentina's president twice. His wife Evita became a national icon of Argentina. Her beauty and wisdom made her husband hugely popular in the country for a whole decade. She would have headed the country if she had not died from cancer.

It is worthy of note that Peron's third wife, Isabel, became the president of the country after Juan Peron's death.

The syndrome of Margaret Thatcher's husband is based on low self-esteem. It is hard, of course, for a man to keep it high near a woman who rules your country. However, it is very easy to overcome this form of jealousy. One only has to love the woman for who she is and what she does.