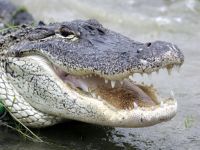 A ninety-year-old lady was mauled by a giant alligator outside her home in Florida, southern United States of America, last week. The 2.4-metre-long reptile caused such serious damage to the woman's leg that it had to be amputated.

The incident happened on the last day of August, when ninety-year-old Margaret Webb was returning home to her house in the rural area of Copeland, Florida. The alligator, which measured 2.4 metres, crawled out of a canal and sank its teeth into her leg, dragging her along the roadside and almost separating her limb from her body.

Dwain Daniels, a neighbour, was passing by when he saw the beast attack the nonagenarian. Grabbing his rifle, he shot the alligator in its right eye, upon which the reptile left its prey and scuttled off into the undergrowth.

The victim was taken to hospital in the nearby city of Naples, where her leg was amputated. She remains in a critical condition. Attempts to find the alligator have been unsuccessful. The local authorities have confirmed that they always try to find alligators which have attacked humans to prevent them from trying to do the same thing again.

The incident, which took place on the last legal day of the alligator hunt, happened in the swamplands called Everglades, which is the perfect habitat for alligators. There are on average five such incidents every year in Florida.

The last fatal incident was on November 13, 2007 when a man fleeing police jumped into a retention pond in Dade Country - and was last heard screaming as he was pulled underwater. There are over one million alligators in Florida.