Most powerful women in the world 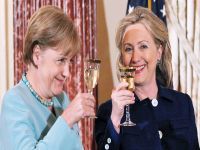 Rousseff, president of Brazil, is the third most powerful woman in the world

Supermodel Gisele Bundchen is the 60th most powerful woman in the world. The U.S. magazine's list is dominated by political entrepreneurs and leaders in the media and entertainment.

"Our list reflects the diverse and dynamic ways towards empowering women today, leading a nation or setting the agenda of critical issues of our time," said Moira Forbes, president and publisher of ForbesWoman, in a statement.

Eight heads of state and chief executives are 29 of the list of 100 most powerful women in the world. They are an average of 54 years of age and control, together, $30 trillion. Twenty-two of them are single.

According to the magazine, Rousseff made history as the first woman to lead the greatest economic power in Latin America, as Angela Merkel was cited as the only woman head of a real global economy of Europe. Hillary Clinton was praised for having dealt with the revolutions in the Middle East and the WikiLeaks revelations in her second year in office as Secretary of State in the U.S..

"Over the multiple spheres of influence, these women came to power through connectivity, ability to build a community around the organizations they oversee, leading countries, what they lead causes them to form personal marks," added Forbes.

Rounding out the top five on the list is the chief executive of U.S. PepsiCo, Indra Nooyi, who heads the empire of foods and beverages estimated at $60 billion, and the operational vice president of Facebook, Sheryl Sandberg, who received credit for having prepared the IPO of the social network that can attract up to 100 billion dollars.

According to Forbes, the women on the list not only attained power through the use of money and force, but thanks to the media, also by using their influence.

Lady Gaga and newly appointed executive editor of The New York Times, Jill Abramson, are in 11th and 12th place respectively. Gaga is the newest on the list, 25 years old, while Queen Elizabeth in 49th place, the oldest, at age 85.

The first lady of the United States, Michelle Obama, who last year topped the rankings, this year slipped to eighth position. See the list of the 20 most powerful women in the world according to Forbes: