Indigent: How many will reach this condition? 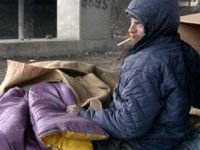 Thomas Kelly, 37, died on July 10, five days after being beaten with electric walking sticks, flashlights, leather and chains, as well as kicking by six police officers who were part of a police patrol in the town of Fullerton, California.

After this incident, Thomas was sent to a nearby hospital, but arrived in a coma. His face revealed multiple bruises, scrapes and minor cuts.

Thomas was part of a growing army of people in the U.S. which many identify indiscriminately as the homeless, homeless or displaced in a system that degrades human beings every day.

Many years ago, in 1986, in New York, on 42nd Street between First and Second Avenue, east of Manhattan, an elderly man was surviving severe bad weather with his face ulcerated by cold temperatures, near the UN headquarters, He was living on public charity.

This man was the public image and a denunciation before the world and the UN of a persistent problem in the country that self-proclaimed itself to be the big defender of human rights.

Perhaps without knowing it, he was part of the ranks of an army of about 40,000 people like him who had nowhere to live in this metropolis. Tunnels, bridges, subways and questionable run down hostels were his dwelling, in the best of cases.

Almost thirty years later, the presence of the homeless in the United States has increased. The economic crisis, unemployment, drugs, discrimination, war veterans and others without help push millions of Americans to this situation.

It is said that in the world there are more than 500 million homeless. There it happens easily, and often it is not possible for people to get out, notes various social organizations.

Sources from the Department of Housing and Urban Development in the U.S. indicate that it is difficult to know the number of people living in the country in this situation.

Several years ago, in 2004, some calculations on the number of Americans who were homeless was established at between 600,000 and 3.5 million, according to the National Coalition for the Homeless.

Now it is difficult to calculate the exact amount by the very nature of people living without homes. Some people go through this situation temporarily, aggravated by something such as close to double-digit unemployment that today undermines the U.S. economy.

For others, especially those who suffer from addiction to drugs or mental disorders, homelessness is a chronic problem.

According to the Coalition for the Homeless, in the United States there is abundant material documenting homeless episodes due to persecution by civil servants, as well as incidents linked to abuses by the police on the basis of confidential data in the United States.

Another sector affected are victims of abuse. A study by the Ford Foundation contends that 50 percent of the homeless are women living on the street to escape violent partners.

On the other hand, the effect of the mortgage and financial crisis that hit Americans also contributes to what many families, especially integrated young people, will turn into: centers of assiduous attention to the homeless, in spite of not reflecting on the stereotype of those who are in this condition.

It is not about single men, drug addicts, mentally ill, veterans or chronically ill. The problem becomes more chronic each year so far as the the cycle of economic crisis gets shorter.

Currently, 10 percent of people who swelled the numbers of homeless families are men and women with good jobs, and school-age children, who simply could not continue paying their mortgages: 81 percent of the homeless are women of 25 years with children under five.

Without it making a comprehensive disclosure, a report of the U.S. Department of Housing and Urban Development, although it does not delve into the causes of this disaster, argues that while the average increase of homeless people is 10 percent, there are regions where it increased to more than 56 percent in one year.

Although the government of President Barack Obama has designated 1.5 billion dollars to combat the residential crisis, it is still likely to be affected negatively as a result of "adjustments" imposed by the Republicans on social programs to increase the ceiling of the debt and deficit reduction.

Several years ago, New York Mayor, Michael Bloomberg, announced a broad plan to try to end homelessness in Manhattan before 2010, because just in the streets of the so-called "Big Apple" more than 40,000 people wander around homeless, of which more than 16,000 are children.

The picture is depressing and it reflects another example to decorate the shop window that Washington tries to conceal from the world.